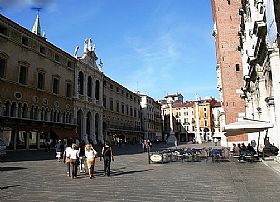 Located between the Venetian Prealps and the Berici hills, Vicenza is one of the oldest cities in the Veneto region. It is also one of the most important Italian art points of interest. It is known as the city of Palladio, taking the name from the popular architect who built here classical but always gorgeous villas and buildings: a real artistic heritage, thanks to which Vicenza has been listed in 1994 as UNESCO site.

Founded by the semi-mythical proto-Italic ethnic group of Euganei, between the XI and the VII century BC, Vicenza got annexed to Rome and called "Vicetia" in 157 BC.The barbarians sacked and destroyed the city in the Middle Ages, but it subsequently returned to its former splendour under the Goths, then the Longobards and then the Franks rule. In 1164, Vicenza got rid of the latest ducky and became a free commune.

It was contended between Padua and Verona between the XII and the XIV century. After Frederick II's victory in 1236, Vicenza went under the rules of the following seigniories: Ezzelini, Da Carrara, Scaligeri and Visconti. In 1404, after the brief Visconti's domination, Vicenza became part of the Serenissima Republic of San Marco.

During the Venetian government (1404-1797), the city saw a great artistic flourishing thanks to the important artists that here worked. We are talking about people like Trissino, Scamozzi, Tiepolo, and most of all, the late-Renaissance architect Andrea Palladio, who designed the most notable building and monuments in town during the Italian Cinquecento.

In the XIX century, after Napoleon's fall, Vicenza passed to the Austrians and was later annexed to the Lombard-Venetian kingdom, until 1866 when Vicanza became part of the Kingdom of Italy.

Piazza dei Signori is the most central tourist point in Vicenza. It originally was a Roman forum and market place, here you will find the symbol of the city, the Basilica Palladiana, also known as Palazzo della Ragione. The previous buildings, projected by Domenico da Venezia in pure Gothic style, was modified by Andrea Palladio in order to be re-adapted to the neoclassical style in fashion at that time. The basilica was enriched with a portico and the typical Palladian, or Serlian archs, made of white stone. The three façades were later "crowned" by an attic.

The Loggia del Capitano, another impressive Palladian building, faces the basilica and homes the town hall. The building was erected between 1571 and 1572 to be the residence of the main representative of the Republic of Venezia.

Located on a lower level than Piazza dei Signori, you will find Piazza delle Erbe, so-called as it has always been the main fruits, vegetables and flowers market in town. Here you will be able to admire a stunning tower dating back to the 200, called "Torre del Tormento" (tower of torment) because it was used once as prison and place of torture.

Piazza Duomo homes the episcopal building and the main cathedral. The lovely dome exhibits a three-floors façade with white and pink marbles, attributed to Domenico da Venezia. Inside there is a unique nave with ogival arches on the side chapels, where it is preserved a polyptych by Lorenzo Veneziano and some Maffei's oeuvres. Palladio is believed to have made the cupola (1565) and the left-side portal.

Piazza Matteotti does worth a visit, too! Some precious monuments like Palazzo Chiericati, Teatro Olimpico and Museo cittadino surround this piazza, indeed.

Palazzo Chiericati, built between 1550 and 1680 and either designed by Andrea Palladio, shows a two-orders façade and decorated by statues. Palladio took advantage of the privileged position (a large open space) to reproduce the typical Roman forums colonnade. The building, born ad private noble residence, nowadays houses the picture-gallery and civic museum.

The Teatro Olimpico (Olympic Theatre) was projected for the local Olympic Academy, by Andrea Palladio. The architect actually started the project in 1580, but it was finished by his pupil Vincenzo Scamozzi, who designed the ligneous scenes determinant to create the great effect of perspective illusionism that characterizes the theatre. Famous because of the similarity with the Ancient Greece theatres, it is considered the first example of permanent theatre in the modern era.

Have a look the the Museo Palladio, which preserves ligneous models and casts, made in occasion of the 70's Palladian exhibitions, as well as historical documents about Palladio and the art of restoration.

Palazzo Thiene dates back to 1542-54: in 1542 the noble Marcantonio Thiene decided to enlarge the fifteenth-century family residence to make a princely palace, as symbol of his family's power. Palladio was in charge of the restoration works, but in 1560 Marcantonio Thiene died and the building was left unfinished. It is still considered a great example of Renaissance architecture and the Palladio's masterpiece.

The early-Christian Basilica dei Santissimi Felice e Fortunato, is another important point of historical and cultural interest. The building was erected in the X century with a rectangular plant, later doubled and divided into three naves. The Benedictine friars built here a new baptistery and added the bell-tower, the rose-window and the Byzantine cross visible from the façade.

At the end of May, thousands of wine lovers reach Vicenza to discover the local cellars and farmhouses belonging to the "Movimento Turismo del Vino mondo dei vignaioli", during the huge wine festival known as Cantine Aperte.

The Fiera del Novello assemble together the best wine producers nationwide for the rite of to pouring off the wine from the first bottle of the year.

You will probably find interesting even the Mostra internazionale di Oreficeria (International Exhibition of Goldsmith's art) during the months of January, June and September and the concert season of the Teatro Olimpico, during May and June.

Among the typical products, you will be able to appreciate the local cheese. Vicenza boasts indeed a millenarian cheese-making tradition: the typicality of the "formajo" from Vicenza is testified and preserved protected by the DOP mark (Italian for Protected Designation of Origin). Do not forget to taste some Formaggio Asiago, with the variants: fresco, d’Allevo, vecchio or stravecchio, Dolcezza e Panarone.

Haven't visited yet? Have questions about Vicenza? Ask them here! 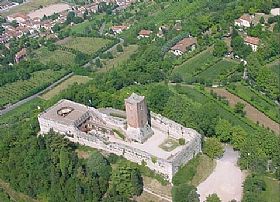 Montecchio Maggiore is located in the Veneto region, between Padova and Verona. 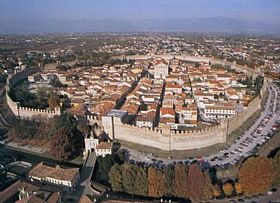 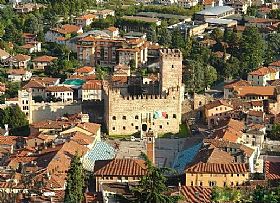