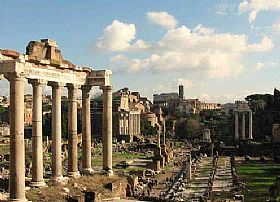 The heart of the ancient world was the bustling Forum, which was the political, religious and commercial center of Rome. The forum was alive with government activity, merchant business, market stalls, temples, courts and brothels. Its monuments remind visitors of Rome's domination and power as the preeminent empire of the time. There are triumphal arches, statues, and columns to celebrate Rome's glory. Basilicas were built as centers of government business and the administering of justice.

There's a lot packed into a relatively small area. Some of the highlights are listed below.

Arch of Titus. Erected in 81 AD to commemorate the sacking of Jerusalem by Titus and Vespasian in 68 AD, an event predicted in the Gospels, look for the Hebrew symbols pictorials inscribed in the marble-carved reliefs.

Temple of the Vestal Virgins. Six virgins kept the flame burning in the circular temple of Vesta, goddess of fire. The girls served for 30 years and enjoyed high status and financial rewards in exchange for their faithfulness. They paid a heavy price if they lost their virginity - they were buried alive. The virgins' residence is next door - a rectangular structure around a central garden.

Temple of Castor and Pollux. One of the well-recognized ruins of the forum, it was dedicated to the twin offspring of Helen of Troy. Its striking columns still rise high above the ancient ruins.

Trajan's Market and Forum. Built in 107 AD by Emperor Trajan, it was, in essence, a huge colonnaded shopping mall of ancient times which housed vendors who hawked goods and spices from throughout the empire. The grain, wine and oil rations were also distributed here, and men met for drinks in the tavern.

Mamertine Prison. A dank dungeon where prisoners of state were kept, the former cistern was the spot of imprisonment for both St. Peter and St. Paul before their executions. It is thought that Paul wrote his second letter to Timothy from this prison.

The Forum is a fascinating place to wander, and a striking scene at night. Go to the Campidoglio for a good overlook at sunset or after dark, when the forum is floodlit and casts a romantic air.

Haven't visited yet? Have questions about Roman Forum? Ask them here!