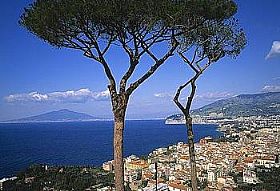 Sorrento is one of Italy's most famous resort towns. Placed on a perch high above the Mediterranean, it is like a balcony over the sea with views that extend from the island of Procida across the Gulf to Naples and Mt. Vesuvius. The city sits on the bluff that ends abruptly at a sheer cliff that plummets straight down to the sea. It has, for more than two millennia, enjoyed the status of seaside destination, starting with the Greeks. It came into its own as a summer destination during the Roman era, when emperors Agrippa, Tiberius and Augustus had their splendid villas here.

Sorrento sits in a sheltered spot on the promontory, protected by the surrounding hills. It has been an important port for centuries of seafarers. It has been called "La Gentile" ("the nice one") for its mild climate, elegant streets and gardens, and friendly residents. It has many millennia of welcoming travelers, and the tradition of hospitality is carried on proudly.

The name derives from the Latin adaptation of "sirens," a reference to the mythical musical mermaids who lured Ulysses and his crew with their melodic but deadly songs. It is said that the sirens lived in the rocks below Sorrento. It was an important resort for the Romans, and traces of their opulent homes and gardens can still be seen, along with the Porta Romana, the ancient gateway to the city. It saw a series of invasions by the Goths, Byzantines and Normans, and was attacked by Saracens and Barbary pirates before becoming a city-state, then falling under the domain of the Kingdom of Naples.

The center of the city's life is Piazza Tasso, which is full of energy and people at all hours. Corso Italia is lined with caffes, restaurants and shops but the entire historic center has life, sights and eateries tucked away in the side streets. There are loads of pretty palaces fronting the streets, attesting to the town's prosperity. The Villa Comunale is a civic park bursting with blooms and trees, a popular gathering spot for the citizens. Piazza Vittoria contains the Temple of Venus, or what remains of the ancient structure. The church of San Francesco has a cross-vaulted cloister that hosts concerts and art exhibitions. And don't miss the Romanesque Duomo, the city's cathedral that dates back to the 1400s. It has gorgeous doors with a fresco over the portal. It's accompanying bell tower has a clock faced with maiolica tiles and there are ancient columns shoring up its base.

The Museo Correale di Terranova is worth a visit; it is a patrician palazzo of old that the noble counts donated to the city, along with the family's private art collection. There are three centuries of masterpieces and an unusual clock collection in the villa's halls.

Sorrento may just be the ideal destination: it has two beautiful marinas, a lively city center, gorgeous views, fabulous restaurants and sidewalk cafes. It's also great for seeing the region as you can get ferries to Naples, Amalfi, Capri and Ischia; trains to Pompeii; and buses to the other towns along the famed Amalfi Coast. Sorrento is a welcoming place with interesting streets to wander, shops to peruse, beaches to enjoy and food specialties to savor.

Haven't visited yet? Have questions about Sorrento? Ask them here!

Have a look at our vacation villas in Sorrento. 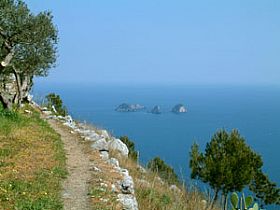 Sant'Agata sui Due Golfi is nationwide famous for sweeping panoramas and great number of trekking routes. 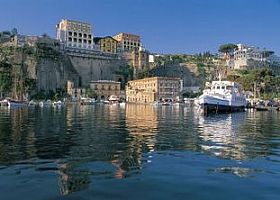