The Excavations of Pompeii 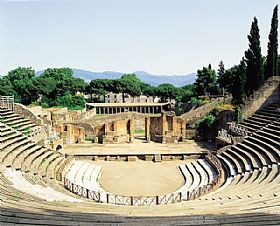 There probably isn't a person on the planet who hasn't heard of Pompeii. The famous ancient city destroyed in an eruption of Mt. Vesuvius has been a tourist attraction for more than 250 years. The rediscovery of the ruins in 1748 put the spotlight on this site that was preserved under the ash of the volcano's fury.

There was a Greek settlement at this location starting in the 7th century BC, but it was the Romans who took it over and made it a resort destination. Wealthy Romans had villas here and there were plenty of places for holiday fun. Excavations revealed swimming pools, food stands and small restaurants, wineries, hotels and brothels. There were many indicators that this was a decadent city, and one that flourished on ancient tourism. The city had an intricate infrastructure and a complex water system that fed pools, baths, private homes and businesses, along with dozens of public water fountains.

Much is known about Pompeii because on August 24, 79 A.D. the city was frozen in time. The catastrophic eruptions from Mt. Vesuvius spewed volcanic ash, gasses and debris in several waves, effectively covering the city. People were overcome quickly by the noxious gases and died quickly, their remains to be found centuries later. The layers of ash and debris, along with gas, created a moisture-free environment that preserved the city, its inhabitants and belongings. Following the tragedy, grass and vines took over the land where the town stood., and the local people eventually forget even the name of the buried town, until it was rediscovered in 1748 and excavations began. A rich cache of artifacts was found, some were pillaged but many were preserved and are on display in the National Archeology Museum in Naples.

There is a modern city surrounding the ancient site, but the topographic structure of the old city is completely intact, having been perfectly preserved in a sort of tomb-like time capsule. Because of its fascinating glimpse into Roman life, the site draws more than 2.6 million visitors a year. They get to view the ancient streets, still bearing chariot ruts, the civic layout and the structure of the city, which boasted an amphitheater, forum, public baths, a gymnasium, plenty of homes, shops and villas. They uncovered gardens and agricultural land around the city, revealing the grains, nuts, legumes, fruits, oil and wine that the Romans consumed there. There were decorative mosaics, vivid frescoes, and a plethora of erotic art, showing it was a hedonistic place for enjoyment.

The excavations confirm and enhance the accounts of the volcano's eruption and the city's destruction that were chronicled by Pliny, who saw the eruption from afar and interviewed survivors for an historical account.

If you plan to visit Pompeii, you might want to book a tour in advance to avoid the lines and have a knowledgeable guide take you around the vast and interesting archeological site.

Haven't visited yet? Have questions about The Excavations of Pompeii? Ask them here!