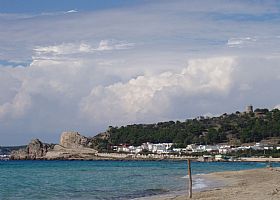 In the tip of Puglia's heel, Sannicola is a small town amidst miles of olive groves. It is just a few minutes from the Ionian Sea and enjoys a typical Mediterranean climate with mild winters and hot summers. The landscape of this part of the Salento is marked by dry stone walls that line up along the properties, including vineyards where the area's DOC wine, Alezio, is produced. This is where much of Italy's olive oil production comes from, as seen in the endless rows of trees, some of them ancient with beautiful gnarled trunks. The plains give way to a rocky and arid coastline bathed by the sapphire sea.

The town was named for San Nicola (St. Nicholas), whose remains are in Bari where a grand basilica is dedicated to the saint, who is popular throughout Puglia. It was formed around a Byzantine church, but developed as a country town later when farmers were permitted to build homes in exchange for working the land. There are still traces of the past in the Rupi di San Mauro, a lone stone chapel with an interior completely covered in frescoes; and San Salvatore, a Byzantine monastery dating to 1310, now within the ruins of masseria that was built there at a later period. The town was originally part of the city of Gallipoli and was sacked along with its big sister by Venice in 1484.

The heart of life is Piazza della Repubblica; while Sannicola is small, there are services, eateries and shops. The nearby coastal towns of San Simone and Lido Conchiglie offer beaches, water sports, and seaside attractions. Sannicola is just a few kilometers from the lovely historic town of Gallipoli, which has Greek roots and sits in a beautiful spot on the waterfront. Galatina, Nardo, Lecce and Otranto are close by, making this a great locale for touring while enjoying a tranquil town atmosphere.

Haven't visited yet? Have questions about Sannicola? Ask them here!

Ask our staff about self-catering homes in Sannicola.