Path of the Gods 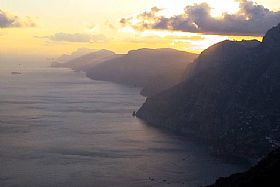 No matter how old you are, whether keen on hiking or not, the Path of Gods with its breathtaking natural beauty, is a must for anybody wants to truly explore the marvels of the Amalfi Coast.

So, if you are in good health and decent physical condition, do not hesitate... Just go! (You won't regret it!)

Bomerano, a small village in the upper hills above Conca dei Marini is the starting point. Bomerano is a cute "little Switzerland" located below the mountains between Sorrento and Amalfi that the "Sentiero degli Dei" (the Path of Gods) crosses towards Arienzo di Positano (about 1 Km from Positano). Of course, you can also do the path "in reverse" starting in Positano or Nocelle and ending in Bomerano.

The Path of the Gods skirts the steep hillside above the coast and crosses one of the most spectacular and wild gorges of the Amalfi Coast. It is well-marked and very popular, so you will have other walkers to follow if you're in doubt as to the trail. Once you reach the small village of Nocelle, you will have two options:

1) Continue towards Montepertuso, where the path plunges along an ancient paved alley to the historic center and gorgeous sea in Positano; or, 2) Take the bus line Nocelle-Positano.

Its breathtaking beauty and height makes you feel close to heaven, but in spite of the name, the Path of the Gods is an extraordinary monument to the work of Man that, throughout the ages, has been able to tame and settle even the most impracticable places on the Amalfi Coast.

Today the path is still used by farmers, woodsmen and shepherds, as it touches old vineyards clinging to the mountain: the species of grape cultivated in the area is called "ped'e palomma" (the most ancient vine in Campania).

Beside the path, you'll find caves hollowed into the rock and terraces dropping from the cliffs to the sea and deep valleys. You'll spot plenty of birds soaring from their aeries.

THE PATH OF THE GODS

You will depart from the main square in Bomerano. It is best to arrive by bus or hire a private driver so you don't have to come back to collect your car after your hike!

There is a large placque in the piazza directing you along a street to begin your walk. After following an asphalted street, you continue through the bizarre rocky cliffs of Grotta del Biscotto. Here you’ll need a camera if you want to capture the magnificent scenery and mesmerizing views of Capri and the Bay of Naples.

After passing the ruins of a farmhouse, go down to the valley floor, walking along vineyards and continuing until the foot of a craggy rock, over which the member of Napoli CAI (Club of Italian Alpinists) have placed a marker stone, in memory of Giustino Fortunato (the economist who named the Path). A few metres uphill you will find the pass of Colle La Serra (580m), with a side path to the left side leading down to Praiano, and on the right a path marker for Sentiero degli Dei.

We won't give you a step-by-step "guide" as it is best to discover the beauty on your own, to have those gasp moments when the scenery opens up to breathtaking views. We will tell you that the path is rocky is places and involves stairs in some some places. It is not level and some spots literally hang over the edge of the cliff so keep your eyes open! Take a picnic and enjoy the walk, rather than rushing through it.

The path follows the folds of the landscape, so at times you'll be on rocky cliff and at times in a shady canyon or even in wooded areas. The array of scenery is one of the things that really make it wondrous.

The path is well-marked with signs and with painted red and white stripe trail markers, so you won't have a problem following it and finding your way.

Expect it to take about 2 hours from Bomerano to Nocelle. There is a snack bar where you can get drinks and sandwiches, and sit and rest. You can stop here and go back to Bomerano, or you can continue on, all the way to Positano. If you are in good shape and have the stamina, we highly suggest you carry on. You won't regret the choice!

From Nocelle, you can walk down to Montepertuso, and then carry on along the stepped "lanes" to reach Positano, or you can take the steep staircase from Nocelle down to Positano. You can also cheat and take the bus to Positano! :)

P.S. Staying in Praiano you will be able to choose between two options:

Haven't visited yet? Have questions about Path of the Gods? Ask them here!

Rent a holiday home in Amalfi Coast and travel like a local.