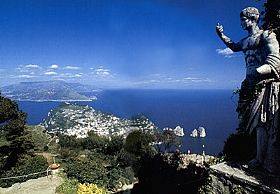 The isle of Capri rises like a giant slate-blue limestone block, with high cliffs falling sheer to the sea. The island is dotted with caves and massive rocks. Severed off from the Sorrento Peninsula mainland in ancient times, Capri was the first Greek colony in the Gulf of Naples. It was later chosen as the permanent address of Roman Emperor Tiberius, who built an incredible number of stunning villas. Capri is consistently mentioned in travel publications and is perennially popular with movie stars and the jet-set, as well as ordinary travelers seeking a stunning spot.

This little island became an "in" destination in the 19th century, thanks in part to the discovery of the Blue Grotto; tourists from everywhere started coming to enjoy the mild climate and unbelievable natural beauties of the unique, rocky island.

Marina Grande is the main port, also known as a lovely seaside resort in itself. A few steps from the beach are the remains of the so-called "Palazzo a Mare", which may well have been the favorite residence of Emperor Augustus. Villas Williams and Stepanow dating from later periods are also preserved within the ancient Roman structure, though the most monumental remains are those of the popular villa called "Bagni di Tiberio" (Tiberius' Baths).

From Marina Grande, a funicular whisks visitors up to the Piazzetta in just a few minutes. Known formally as Piazza Umberto I, the Piazzetta is the beloved and trendy heart and soul of Capri, where the locals, visitors and glitterati all join together at the outdoor cafes and scenic overlooks. It's considered one of the most favored and attractive piazzas in Italy. It's the hub of Capri's center, with smart shopping streets radiating off of it. Enjoy the Roman ruins of once-glorious villas and the characteristic churches that are sprinkled about. The Certosa di San Giacomo was built in the 1300s by the noble Capri family, Arcucci. Built in the 14th century, the monastery survived the incursions of Turkish pirates but, once suppressed the religious order, it was put to use to host exhibitions, congresses and music festivals. Villa Lysis is a grand residence with glorious garden, named for a Greek philospher. Known as "La Glorietta", it's on a cliff over the sea and is built like a classical temple.

The Belvedere Cannone is a panoramic point where the French had places a powerful cannon to defend the south side of the island. Romantic vistas await you there now. Walk the Via Krupp, which starts at the terraced gardens of Augustus and winds down to the marina. The tightly switch-backed trail is an engineering feat on the steep hillside and offers breathtaking views (but the climb up is a tad more difficult than the descent!).

Capri isn't just the name of the island, it's also the main city. The second town is Anacapri, From Anacapri you can take a chair lift up to the top of Mt. Solaro, where views sweep across the entire Bay of Naples and the Amalfi Coast. There are churches and villas to visit here as well.

Of course, no visit to Capri is complete without a boat ride to the famed Blue Grotto, a marine cave which emits a particularly impressive glow. Hire a boat to take you on a tour around the island, where the views of the massive rocky isle are astounding; it looks much different from the water level, and there are many caves and coves to enjoy. Pack a picnic and moor at a little beach, or circle the island at sunset for an especially romantic glimpse of Capri.

Haven't visited yet? Have questions about Capri? Ask them here! 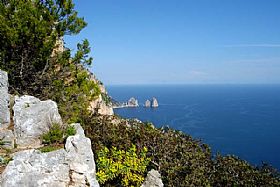 Anacapri is the second town on the Isle of Capri, resting at the foot of Mount Solaro. 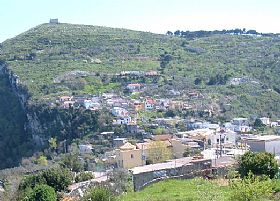 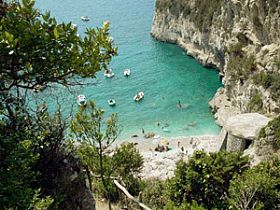