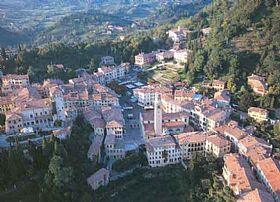 An Italian poet dubbed Asolo the "city of a hundred horizons" and its setting among foothills and mountains certainly gives that impression. The hills seem to unfold before it, while the peaks of Mount Grappa and the Alps rise beyond it. Asolo has a nearly perfect setting with rich woods, verdant vineyards, captivating castles and mountain meadows. Here you'll enjoy nature's bounty in the form of mushrooms, beans, and radicchio, along with orchard fruits like apples and cherries. The area is famous for its prosecco wine and for distilled grappa. It's location is great for exploring art cities like Treviso, Vicenza and Padova, and to see the many prestigious Palladian villas sprinkled about the area, such the Villa Barbaro in Maser.

Up above Asolo on Mt. Ricco rests the remains of the fortress and pieces of defensive wall that once protected the town. In the city itself you'll find a lovely atmosphere with pretty shop-lined streets, lively piazzas and narrow lanes. The hub of life is Piazza Garibaldi, where there is a 16th century fountain that is topped with the winged Lion of St. Mark, heraldic symbol of Venice. Asolo was closely connected to the famous maritime republic and its architecture is noticeably Venetian-inspired. Wealthy citizens of the fair city built villas here as their summer retreats. Venice bestowed the city to Caterina Cornaro, queen of Cyprus, who established an aristocratic court of artists, philosophers and poets.

While Asolo flourished during the time of the Venetian Republic, it was also a Roman hub from the first century BC through the first century AD. In fact, it was the Romans who gave Asolo its name - Acelum. There are remnants of the Roman baths, aqueduct, forum and theatre displayed in the Civic Museum, which is in a palazzo known as La Ragione, a beautiful building with a frescoed facade. Piazza Brugnoli is placed over the former forum, and you can glimpse remains of the acqueduct here. The piazza is fronted by the splendid Villa Scotti-Pasini and its captivating terraced garden. The castle that was once home to Queen Caterina of Cypress and her elegant court is now home to a graceful theatre. The cathedral was redesigned by Giorgio Massari and contains an altar of Carrara marble along with priceless artworks by famous artists, including Lorenzo Lotto.

Take a stroll through the most characteristic part of the old centre, between Piazza del Mercato, via Dante and Piazza D’Annunzio, where you'll find charming streets and lovely buildings, including the Municipio (the city hall) which occupies the Palazzo Beltramini.

From the fortress above town are endless views that stretch from the alpine peaks to the softer foothills and extend down to the plain towards Venice - from here you'll surely see those hundred horizons.

Haven't visited yet? Have questions about Asolo? Ask them here! 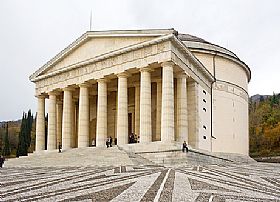 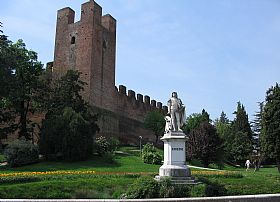 Castelfranco Veneto is a lovely gem set between the cities of Treviso, Padova, and Vicenza. 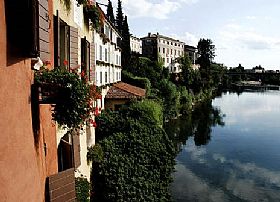