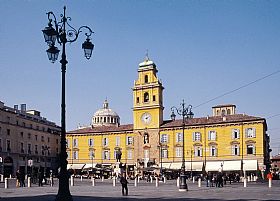 The heart of Parma is centered on the central Piazza Garibaldi. It's not just the central hub of the city, it's Parma's heart and soul, where civic business takes place and where the citizens gather. Built over the ancient Roman Forum, you can see nearby monuments as testimony, such the Ponte Romano to the west, with its arches visible from below, the Roman theater and amphitheater to the south.

The piazza was called Piazza del Comune or Piazza Grande before being renamed for the unifier of Italy, and has, since Roman times, served as the civil, religious and commercial hub of Parma. In the piazza is the Palazzo del Governatore, built in 1282 as the Palazzo dei Mercanti (merchants' guild). The Palazzo Vecchio, also called Palazzo del Comune, was constructed in 1221, and is lined with a loggia and has frescoed salons inside. The tower was added in 1470, with its astronomical clock.

The church of San Pietro was already present in 980 but was rebuilt and then transformed in the 1600s in neoclassic style with Baroque touches. You'll find stuccoes, paintings and frescoes by the area's masters.

The piazza was enclosed in the 1300s and embellished with battlements and gates that could be closed at night for defense. There were craftsmen workshops, markets, and stores surrounding the piazza. It was altered again in the 1800s, giving it the current form and face. It is Parma's center, with outdoor cafes and a shopping district still surrounding it.

Haven't visited yet? Have questions about Piazza Garibaldi? Ask them here!