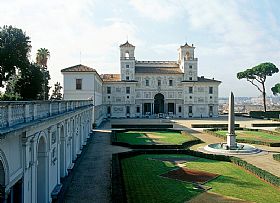 The Pincio Hill is a panormaic point in Rome, near the famous Spanish Steps and the church that tops them, Trinità dei Monti. It's actually not considered one of the infamous seven hills of Rome, as it is located outside the "sacred enclosure" of ancient Rome, but is within the Aurelian Walls. An ancient temple stood here, and Roman artifacts were found at the site.

Here on this leafy hill is the regal Villa Medici, which was started in 1564 by the nephews of Cardinal Giovanni Ricci di Montepulciano. It was later acquired by Cardinal Ferdinando de' Medici in 1576 who commissioned the Florentine architect Bartolomeo Ammanati to enlarge the villa. While the facade of the Villa is simple and unpretentious, the interior is rich and vibrant and perfectly suited to the typical style of the Florentine palaces. The Renaissance-style villa is like an open-air museum, adorned by dozens of statues, reliefs, and ancient marble fragments found on the grounds, including the famous marble garlands from Ara Pacis of Augustus.

The carefully planned garden is reminiscent of the marvelous botanical gardens created by Cosimo de' Medici in Florence: it displays a luxuriant vegetation full of pine trees, cypresses, oaks and many rare plants. In the garden of the Roman Villa stands the colossal statue of the goddess Rome and also the head of Meleager, which was probably made by the sculptor Skopas. In the studio of Ferdinand de 'Medici, painted (as in other rooms of the house) by Jacopo Zucchi and the shop, we must also mention the representation of an aviary with frescoes depicting, among other animals, even the first European representation of the turkey. In 1587, Ferdinand was forced to leave Villa to go to Florence where he succeeded his brother Francesco I and became Grand Duke of Tuscany.

The villa was owned by the Medici family, and used as one of the residences of Cardinal Alessandro de' Medici who, in 1605, became pope under the name of Leo IX. During the seventeenth century Velasquez stayed here, and we know that between 1630 and 1633, the villa hosted Galileo Galilei, while under house arrest because of his "heretic" thoughts. In 1737, the Medici dynasty died out, and then the villa became property of the Lorraine family. The Grand Duke Peter Leopold of Lorraine, who longed to gather all the Medici collections in Florence, moved to Tuscany most works of art of the Villa, which are still preserved among the Uffizi Gallery, the Boboli Gardens, Palazzo Pitti and the Archaeological Museum.

The Villa Medici is home to the Academie de France a Roma, though it is open a museum and also hosts cultural events. The gardens are open to the public, as well.

In 1801, Napoleon bought the villa, and two years later, he transferred here the Roman headquarters of the French Academy, founded in Paris in 1666 by Louis XIV, France's Sun King.

Haven't visited yet? Have questions about Villa Medici? Ask them here!