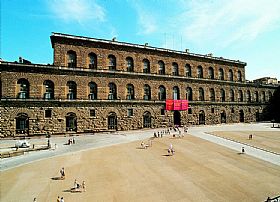 The Pitti Palace is grand in every sense - the largest palazzo, the largest museum complex, and the largest park in Florence. The imposing facade and sprawling palace was designed by Brunelleschi for the prestigious banking family, the Pitti, in 1457; the rusticated and severe facing was a departure from normal Renaissance style.

The Pitti lived there only about a century, though, as the palazzo was purchased by the Medici in 1549, and they quickly went about doubling its size, adding two wings and the grand courtyard. Two more additions were constructed by the Lorraine dynasty in the 18th century, making it the largest palace in Florence.

After the Medici line died out, the Palazzo Pitti housed other ruling dynasties - the Austrian Lorraine, the Savoy, and even Napoleon for a while. The massive Medici art collection remains, enriching the place with some of the world's most famous masterpieces. There are actually five museums housed in the Pitti Palace.

The Royal Apartments and Palatine Gallery. Opened in 1828 by the Lorraine to display the collection of masterpieces that includes works by Raphael, Titian, Artemisa Gentilleschi, Caravaggio, Tintoretto, Pietro da Cortona, to name a few.

The Gallery of Modern Art. Displays works from the 18th century through WWI.

Costume Gallery. A collection of 6,000 items, it is the only museum dedicated to the history of fashion in Italy.

Boboli Gardens. The sprawling park is Florence's largest garden, a delightful green space with hidden joys to be discovered, and views of the city from certain corners. It was designed and laid out in the mid-1500s and is still intact as the landscape designer intended.

Haven't visited yet? Have questions about Palazzo Pitti? Ask them here!