A Walk Through Ancient Rome 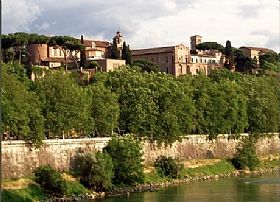 Only in Rome can you take a walk through two millenia in two miles! This self-guided tour leads to some of Rome's most ancient sites.

There's no denying that Rome is rooted in antiquity; it is called the Eternal City for good reason. Rome defined the ancient world with its cultural and political structures (shadows of which are still in effect today in modern governments, stadiums and street plans.)

If you want a quick day-trip through history that takes you to two of the famed seven hills of Rome along with some of the ancient world's most important sites, start at the Circus Maximus (easily accessed by metro).

The Circus Maximus spreads out below the Aventine and Palatine hills. The7th century BC stadium was built specifically as an entertainment venue for chariot races, the ancient world's version of Formula One racing. The Circus sat about 150,000 people and offered food stalls below the seating area. It also hosted gladiator games before the Colosseum was constructed and presented the pomp of highly-orchestrated olympian-type processions of horsemen, charioteers, and athletes accompanied by bands and incense. From the Circus Maximus you can glimpse the Imperial Palace that crowns the Palatine Hill, the former residence of the Emperors.

Rising above the Circus Maximus is the Aventine Hill, which was and still is an upscale residential district. Here you'll find some of the city's earliest Christian churches. Santa Sabina was built in 422 AD and retains the footprint of the Roman temple upon which it stands. The interior mimics an imperial basilica with its 24 marble columns salvaged from the temple and filtered light. Incredibly, the 5th century doors remain, showing the craftsmanship of the time depicting intricately carved Biblical scenes.

Along the banks of the Tiber River rest some of Rome's most fascinating spots. Tiber Island sits in the current and is connected to the river bank by a bridge. Opposite the island is Portico d'Ottavio, the gateway to the Ghetto. While Jews were present in Rome since the 2nd century BC and active in civic life for centuries, during the persecutions in the 16th century they were constrained to a walled area near the Tiber. The area became known as the ghetto, from the word "borghetto," which means little district. The neighborhood is charmingly preserved and nice to wander.

Right on the river, the ancient area known as Forum Boarium is rife with remnants. Two important temples - one circular and one rectangular - are the best preserved ancient temples in town. The church of Santa Maria in Cosmedin is a Byzantine basilica built in the 6th century. The simple interior preserves elaborate mosaic tilework, but is most famous for its strange marble face in the portico, the Mouth of Truth, which was popularized in the film, Roman Holiday and has been a tourist attraction ever since. The Ponte Rotto is a broken bridge, built in the 2nd century BC, which still stands silently in the Tiber and makes a scenic photo backdrop.

Haven't visited yet? Have questions about A Walk Through Ancient Rome? Ask them here!