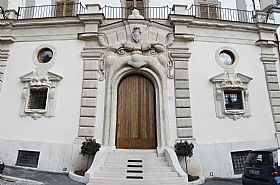 When Baroque painter Federico Zuccari decided to build a home in Rome, he made it a study in contrasts. The artist responsible for the frescoes in Florence's famous dome of Santa Maria del Fiore purchased a plot of land in 1590 on the newly developed Pincio hill, off Piazza Trinita' dei Monti. The site sits atop the Spanish Steps and he planned a palace for the irregularly-shaped tract.

The simple Mannerist style facade is adorned with door and window cornices of monstrous proportions - not their size but their appearance! The creative carvings recreate the faces of monsters, apparently inspired by the Park of Monsters in Bomarzo. Everything else is understated and elegant. The artist's studio was place within a trapezoidal shaped point of the building.

It is said that the doors and window's of the entry on Via Gregoriana wee meant to be a reference to Dante's Inferno, while the interior and peaceful garden were past the threshold of Paradise.

The Palazzetto Zuccari was barely completed when the artist died in 1609. It was passed around a bit and later became lodgings for traveling artists. It located in what would become the literary and artistic "ghetto" of Rome, near the Spanish Steps, Piazza Barberini and Via dei Condotti. In the early 1900s, Henrietta Hertz acquired it and installed her fine art collection and library of more than 5000 volumes, which she willed to the State when she passed away. Today, her collection forms the basis of the Biblioteca Hertziana, an art history library.

The only part of the building that is open to the public is the library, open Monday through Frieday from 9:00 AM til 2:00 PM.

Haven't visited yet? Have questions about Palazzetto Zuccari? Ask them here!