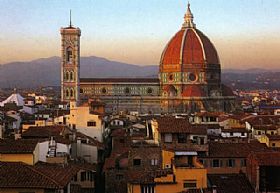 Florence's famous cathedral is the defining feature of the city's skyline. It's terra cotta-tiled dome, high freestanding bell tower, separate baptistry and front piazza form the heart of the city. Constructed to be not only a monument of faith but of the city's importance, it was named Santa Maria del Fiore, dedicated to Mary "of the flower," a reference to the lily that is the symbol of Florence. It was (and remains) one of Europe's largest churches.

The first stone was laid in 1296 and work was undertaken in fits and starts, with periods of inertia and plan changes. The accompanying baptistry predates the cathedral; completed in 1128, it is one the city's oldest buildings. The tall campanile (bell tower) was designed by Giotto using the same stone that would be used on the cathedral and was completed in 1359. It bears sculptural decoration with relief carvings and adornments. Panels on the lower part depict the creation of man and woman, along with human inventiveness through creative activities, a testimony to Florence's artistic and craft traditions.

The neo-Gothic ornately-decorated facade is a candy-colored intricate inlay of Tuscan marble. Five chapels surround the exterior capped with small domes, but the primary focus is the monumental dome designed and creatively executed by Filippo Brunelleschi, which would become his (literal) crowning achievement. It was the largest dome ever to be built without scaffolding and required new hoisting equipment, which Brunelleschi himself would invent in order to complete the task. The soaring ribbed dome would take nearly twenty years to build but was so impressive that the famed artist Leon Battista Alberti wrote that it was "a structure so immense, so steeply rising toward the sky, that it covers all Tuscans in its shadow."

The dome continues to stand as an architectural achievement and continues to astound visitors. Its interior is gorgeously frescoed with a vivid rendition of the Last Judgement by Vasari. An internal staircase allows visitors to climb to the top to enjoy breathtaking views of Florence from its summit. The crowning gilt copper ball by Verrocchio contains holy relics.

There are 44 decorated windows, some completed by Ghiberti, which comprised the most extensive stained glass project of the Renaissance period. Aside from the windows and the decorated dome, the interior is relative unadorned to focus on the spiritual instead of the periferal.

Behind the Duomo is the Museo dell'Opera del Duomo, a museum that was originally used as the workshop and storage space during the cathedral's construction. It houses treasures removed from the church, the baptistry and the tower and placed here for preservation, along with tools and equipment used to build the immense structure. It's definitely worthy of a visit.

Haven't visited yet? Have questions about Santa Maria del Fiore? Ask them here!