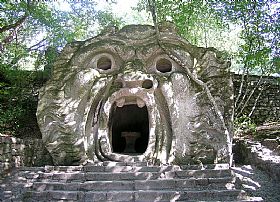 An imaginative world of monumental sculptures will delight kids and confound adults at the Monster Park in Bomarzo. Located north of Rome just minutes from the motorway, the park was commissioned in 1552 by Prince Pier Francesco Orsini, one of Rome's noble families, to occupy his time and thoughts following the death of his wife, Giulia Farnese. The task of design and sculpture was taken on by Pirro Ligorio, who fashioned surreal and sometimes grotesque carvings portraying a seemingly senseless blend of mythology, allegory and oddity.

The Monster Park is a striking contrast to the refined mansion and elegant statuary and fountains of Villa d'Este, his most famous commission. It's also a departure from the era's norm when Renaissance gardens were ordered, proportioned and formal. The Parco dei Mostri is instead disordered, distorted and scattered, even wild. Set into a roughly terraced wooded hillside, the trails meander through a mystifying maze of symbolism, transporting visitors among larger-than-life carved heads, exotic animals like an elephant, giant turtle and pegasus, and past sphinxes, dragons and mythological figures.

The private park, built for the prince's amusement, remained relatively obscure until the 1950s when it was purchased by Giovanni Bettini, who restored it and publicized it. The park is left in a natural state and is perfect for picnics. It's a highlight for kids. The fantasy world now draws visitors from all over the world who wander around wide-eyed and wonder at the motive behind this unusual antique garden.

The Monster Park is open daily from 8:00 am until sunset, year-round. It is located near Viterbo, just off the A-1 autostrada at the Orte exit.

Haven't visited yet? Have questions about Park of Monsters? Ask them here!