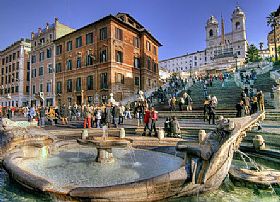 The Spanish Steps is one of Rome's most recognizable attractions and a popular gathering spot, but was intended as a gateway to the church that rests atop the staircase.

The Piazza di Spagna has long been a meeting point and hang-out for foreign visitors and Roman youth. The steps are the perfect place to sit and watch the action in the piazza, rest and soak in the scene. They have been featured in many films, and you might feel like you're an extra on a movie set when you're sitting in the midst of the action. The Spanish Steps are beautifully decked out with azaleas in spring and a life-size nativity scene during the holidays. Next to them is the famed Babington's Tea Room, a plush spot popular with Anglo visitors for years, and is the adjoining Keats-Shelley Memorial House.

Down below in the piazza is the fanciful fountain called the Barcaccia, a whimsical lopsided boat created by Pietro Bernini, whose son Gian Lorenzo, became a sensationally successful sculptor and architect. The Spanish Steps along mark the beginning of the famous Via dei Condotti, also known as "designer row" where the most upscale shops in Rome are located.

Haven't visited yet? Have questions about The Spanish Steps? Ask them here!