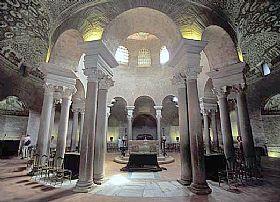 Tucked away outside the Aurelian walls is the gem of Santa Costanza. It's connected to the complex of Sant'Agnese, which rests over top of an extensive catacomb complex (tours available) in the leafy Nomentana area of Rome. Here among the embassies and palaces-turned-apartments you'll find a relatively unknown but charming church.

Built in the mid-300s AD by Constantine in honor of his wife, Costanza, it was planned as a dual basilica-mausoleum in her memory. The circular shape mimics other Roman structures, such as the Pantheon, the Mausoleum of Augustus and the temple of Minerva, but is lighter, more delicate and more luminous, befitting a female. The interior is bright thanks to windows outlining the dome. The circular chapel is bordered by twelve pairs of columns that are capped by carved capitals. It displays splendid masterful mosaics of natural elements, such as birds, palms and plants, along with a lovely and whimsical portrayal of the grape harvest in vivid detail.

It was deliberately placed over the underground burial chambers where Sant'Agnese was laid to rest because Costanza had great admiration for that saint. Named a saint herself by the emperor Constantine, the remains of Costanza and their two daughters are interred here. It is one of Rome's earliest basilicas, and the unusual design and luminosity make it a popular spot for Roman couples to make their marriage vows.

The church/mausoleum of Santa Costanza is on via Nomentana, north of the city walls, beyond the via Veneto, past Michelangelo's monumental Porta Pia gate. It is open from 9:00 am to 12:00 pm Monday through Saturday; and from 16:00 to 18:00 Tuesday through Sunday. The catacombs can be visited on a tour, available in multiple languages. It's much less crowded than the other catacomb complexes of Rome. You shouldn't miss the adjoining church of Sant'Agnese. There are shops and cafes tucked away in this typically Roman neighborhood.

Haven't visited yet? Have questions about Mausoleum of St Costanza? Ask them here!