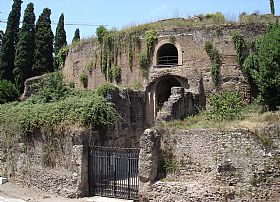 One of Rome's impressive monuments gets little attention these days, but the mausoleum of Cesar Augustus was a grand feat in its day. The emperor had taken the world by storm and became the founder of a world empire and a ruling dynasty. He turned Rome into a flourishing and beautiful city bathed in marble. But the grand grave he planned for himself and his family fell into disrepair and gets largely overlooked.

It should be given a glance, though, if for nothing more than the sheer history and obvious grandeur it once claimed. Built in 28 BC by Ottaviano Augusto, known as the Emperor Augustus or Caesar Augustus, the man had a month on the Roman calendar named after him because of his importance. He had invaded Egypt, the last Hellenic kingdom not part of the Roman Empire, and subdued Marc Antony and his wife Cleopatra. He returned to Rome a hero and went about building himself a grand monument tomb to celebrate. He took inspiration from other mausoleums of the ancient world, like the heroes of the Trojan war and Achilles' tomb, but mingled in his own ideas, as well.

The circular structure is an enormous drum-like base with a cylindrical temple built on top. There were evergreen trees surrounding it, and the entire structure was faced in milky travertine. It was described by Greek geographer Strabo as being near the river, built of white stone on a high base, it's summit covered with evergreens and the whole surmounted by a statue of Augustus. It is the largest circular sephulchre. There were bronze plates that recounted the biography and exploits of the emperor, the words of that plate are engraved on the walls of the Ara Pacis. There had been two granite obelisks guarding the door; one is now in Piazza Esquilino while the other stands at the fountain in the Piazza del Quirinale.

Only the substructure is still visible, but you can see how impressive the tomb would have been, which held not only Augustus but his family, Tiberius and Caligula, as well. It is located next to the Ara Pacis, the "peace altar" of Augustus, one of his legacies.

Haven't visited yet? Have questions about Mausoleum of Augustus? Ask them here!