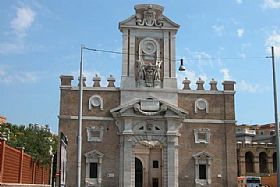 On the edge of the historic center of Rome, Porta Pia is one of the city gateways. An arched entry in the Aurelian walls, it's located at the start of Via Nomentana, one of the historic roads that radiated out of the capital to the hinterlands. Porta Pia was commissioned by Pope Pius IV and named for himself, built to replace the ancient Nomentana gate that stands just a few feet away.

The architectural commission for Porta Pia was given to Michelangelo who designed two distinctly different facades. The one facing the (then) countryside was more classical and monumental in style, like something in the Forum, while the opposing facade is more stately and decorated, like a palazzo or church. It represents one of Michelangelo's last works.

Porta Pia was the site of a famous breach in 1870. With the fall of Napolean, Rome, which had been the capital of the Papal States, was being contested for by the Kingdom of Italy. The Savoy troops managed to breach the barrier of the Aurelian Wall through this gateway and enter the city on September 20. A monument to that moment sits in front of the gate.

The neighborhood outside the walls is the Piazza Fiume district, a lively area where locals go for drinks and dinner, as well as shopping at La Rinascente department store or other shops and the covered market in the piazza's vicinity. It's a great place to see an authentic slice of Roman life.

Haven't visited yet? Have questions about Porta Pia? Ask them here!