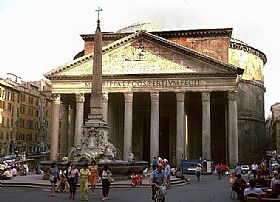 The Pantheon is a majestic temple that, since the I century AD, has preserved almost intact its impressive look. It used to be a pagan edifice, which was consecrated as Christian church in 604 AD.

A dive into the past of about two thousand years, but still a surprising case of technology in service of art: anything in this building has something supernatural, from the colourful floor to the great monolithic pillars outside and a cupola like that, dear all, would be hard to realize even using the modern instruments! :-)

During the Roman Age, from outside, the visual impact of Pantheon was quite different: the street level was significantly lower and people accessed the pronaos through a staircase, the presence of imposing buildings leaning against each other at both the sides of the temple, obstructed a proper external view. The visitors, expecting a traditional temple, entered through the pronaos and stayed bewildered in front of such a spectacle.

Unlike the Greeks simplicity in architecture, the Romans emphasized grandeur. Building of breath-taking palaces, temples, and stadiums showed the power and dignity of Rome. In the creation of the Pantheon, Romans developed the round dome roof using concrete as a building material.

The cupola can be reasonably considered the biggest in Europe. The Romans resorted to a brilliant expedient to build such a simple but genial structure: they used heavy materials and supporting walls to make the base of the cupola and lightened the top. The concrete was mixed with scales of bricks to make the lower part, while going up there are tuff scales and porous volcanic material, until the height of lightness: at the top is a circular opening called the oculus - oculus means "eye" in Latin - which lets in a round shaft of light that at different times of year illuminates different niches and was meant to function originally in at least two distinct ways. It acted as a spotlight which over the course of the year gave fair and measured visibility to the various deities, foreign and native, whose statues inhabited the niches around the dome's interior. The oculus also served as a calendar marking time, uniting the Roman world under the aegis of the only absolutely equitable system of measurement they knew, the clock of heaven itself.

According to the legend, the oculus, which is uncovered, does not let the rain passing inside. Actually this phenomenon is caused by the so-called "effetto camino": a combination of forces inside the cupola, able to pulverize the rain drops, so that they get too small to be seen with the naked eye. There is an efficacious draining system to avoid inaesthetic puddles.

The temple was dedicated to all the divinities and deeply wanted by the Emperor Adrian, even though the author of this miracle of harmony and perfection is probably destined to be unknown.

Some historians do attribute it to Apollodorus of Damascus... as a matter of fact the temple was built over the ruins of a previous edifice ercted by the consul Marcus Vipsanius Agrippa in 27 BC, as still written on the façade. Adrian wanted a huge porticoed piazza to surround the Church, nowadays substituted by the beautiful Piazza della Rotonda, with Renaissance fountain and the notable Egyptian obelisk belonged to Ramesses III.

Turned into a Christian temple at the beginning of the VII century with the name of St Maria Ad Martyres, the Pantheon became, from the XVI century, tomb of some important artists like Raffaello Sanzio, as per his own want. You will even admire the graves of Vittorio Emanuele II and some members of the Savoy family.

Haven't visited yet? Have questions about Pantheon? Ask them here!