The charm of Tuscia 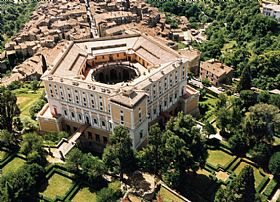 There are gorgeous territories in Italy, magic places lost in old-time atmospheres, rich in art, history and culture: Tuscia is one of those. We are talking about one of the most suggestive areas in Italy, even with a discrete charm, and less touristy than many others.

Our itinerary starts from Civita di Bagnoregio: you will access the hamlet from Porta di Santa Maria, the only gate of five "survived" in town throughout the centuries, so-called because of a church dedicated to the Virgin that rose alongside of it. In spite of the Etruscan origins, the gate's external coating dated back to the Renaissance and the Middle Ages: the lions on each side celebrate the victory of Bagnoresi (inhabitants of Bagnoregio) against the races of Monaldeschi and Baglioni in 1457, while the eagle on top of it, symbolizes the Cardinal Reginaldo Polo (1547-1558). Do not miss the notable sixteenth-century Palazzo Alemanni Mazzocchi, with a characteristic ashlar portal. Even if it used to be owned by the families Alemanni and Mazzocchi, the building is now a municipal property used just in cultural occasions.

From Civita di Bagnoregio driving for 28 Km on the SP56 you will reach Bagnaia, whose name depends on the 22 hectares of true splendour of Villa Lante: one of the greatest architectural achievements of the Italian Cinquecento, reachable from Via Jacopo Barozzi. The residence was originally built for want of the Cardinal Raffaele Riario, to be used to go hunting, and later on finished by his descendants. You will fall in love with the Fountain of Pegasus, representing the winged horse, sprikling water with hoof-strokes. Muses and Graces in a semicircle blow water from above, while four Nereids sprinkle water from below. The staircase on the left side of the fountain goes to a stunning Italian Style Garden (Giardino all'Italiana); while the large street on the right goes to the marvellous secular holm-oaks woody park. Here you will be able to admire the Conservone, Fontana dei Leoncini and Casino di Caccia. We must mention the Fontana dei Mori, by Giambologna, as well as the two buildings (Gambara and Montalto). The extraordinary beauty of Villa Lante depends on the predominance of the garden as regards the architectural oeuvre. The residence is divided indeed into two small twin buildings (built in different times) symmetrically positioned between the central axis of the garden, dominating the whole composition through the water system.

Bagnaia is located at a distance of 70 Km from Rome and only 4 Km from Viterbo. From Rome, take the SS 2 Cassia to Viterbo, then follow the signals to Bagnaia.

From Bagnaia, driving on the SP57 first and then Canepinese street for about 25 minutes, you will get to Caprarola. There you cannot miss the city's symbol: Palazzo Farnese. For Alessandro Farnese (known as Paolo III, the 220th Pope from 1534 to his death, in 1549) was love at first sight for Caprarola, for both the strategical position and the saluber fresh air. He commissioned Jacopo Barozzi, known as Vignola, to design the most outstanding oeuvre of the his noble family.

An authentic work of art: the most illustrious architects and painters, the best staff ever conceivable at that time, co-operated to carry out not only Palazzo Farnese, but the entire town planning scheme, too. Today you can look up to the complex architectural structure; the wonderful frescoes lost among false images of doors, windows, curtains, marbles and statues; visual games following one another so that you get confused. The building looks like an "Olympus", reachable through one way that, leaving the sinuous routes of the ancient medieval street, goes straight to the lovely staircases to get into the large piazza that precedes the main entrance. Just above the basement there is the mezzanine, known as Prelati's: getting there you will see the frescoed rooms by Taddeo Zuccari; like the Seasons Rooms (Stanze delle Stagioni), representing Jove's life, whose perspectives, planned by Vignola, enlarge the space into unreal visions. Walking across the rooms, you will reach the marvellous round courtyard designed by Vignola, composed by two characteristic superimposed colonnades, whose vaults were magisterially frescoed by Antonio Tempesta. The internal helicoidal staircase, known as Scala Regia, could be considered as the best Vignola's oeuvre... amazing! It is a superb stairway supported by thirty columns, through which the Cardinal Farnese could reach the bedrooms even on horseback. The Piano Nobile was built just above the mezzanine, where you can admire the cardinal's bedroom, called Camera dell'Aurora, as well as the celebrity's bedroom, known as Stanza dei Fasti Farnesia, whose frescoes tell about the history of the family.

Haven't visited yet? Have questions about The charm of Tuscia? Ask them here!