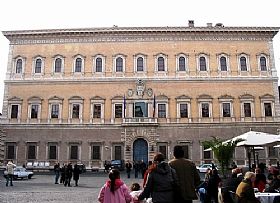 Built to impress, the Palazzo Farnese fronts the piazza of the same name, meant to solidify the Farnese family's fame. The Renaissance palace was undertaken by Cardinal Alessandro Farnese, who would become Pope Paul III. Antonio Sangallo the Younger won the coveted commission but died before it was completed. The final design is the result of an architectural collaborative effort that involved Michelangelo, who the Pope hired to paint the Sistine Chapel, and other notables like Vignola and Giacomo della Porta.

The palazzo was referred to as the Regio Farnese (Farnese Royal Palace) when it was passed to King Carlo VII of Naples, the son of the last descendent of the clan, Elisabetta Farnese. He moved the family's vast collection of ancient sculpture and art to his palace in Naples. The priceless works are now displayed in the National Archeological Museum of Naples and the National Museum of Capodimonte, also in Napoli. French Bourbon King Francesco II took possession in 1860; it became home to the French Embassy in 18874 and so it remains today.

The facade of the Farnese Palace has three orders of window pediments and three varying grades of stone to demark each floor, in typical Renaissance style. The two basins that that are fashioned into fountains out front in the piazza came from the ancient Baths of Caracalla. Interior decorations are superb - especially the frescoed barrel-vaulted ceiling of the gallery by Annibale Carracci. The Loves of the Gods is classic Baroque, with fluid figures, a sense of motion and muscular, glorified forms.

Since it the seat of the French Embassy, the palazzo is generally not open to the public, but they do throw open the doors occasionally for public events or tours.

Haven't visited yet? Have questions about Palazzo Farnese? Ask them here!