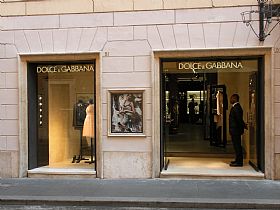 If you faint for Ferragamo or just gotta get your Gucci, Rome is a good place for shoppers. Some of the world's most famous designers have their headquarters here, so you'll have the pick of the newest styles. Here is a run-down of some of the best places for shopping in Rome.

Via dei Condotti. If nothing less than the best will do, this is the street for you. The internationally-known street extends down from the Spanish Step and is lined with the biggest names in the fashion world: Bulgari, Fendi, Prada, Armani, Versace and many more are represented here. The window displays alone are worth a stroll down the Via Condotti; for those with a high budget, you can even have the pleasure of strolling with a few high-end label shopping bags dangling from your wrist!

Via del Corso. A long stretch of street with European chain stores and a few designers thrown in, this is a more plebeian and popular street for shopping. It runs from Piazza del Popolo to Piazza Venezia, a kilometer and a half of shops, with a few museums and cafes thrown into the mix.

Via Cola di Rienzo. Across the river is a less-known avenue where the locals like to go. Less tourists, some of the same shops you'd find in Via del Corso, this Vatican-area street has some nice gelaterias and cafes, along with a daily covered market, making it a pleasant place to look for clothes and shoes.

Other streets for fashions include Via Nazionale, from Piazza della Repubblica to the Forum; and Via dei Giubbonari, near the Campo dei Fiori, with its hip, youthful boutiques.

Antique seekers will like the area near the Tiber, especially Via Giulia and Via del Governo Vecchio.

If nothing less than an enormous shopping mall will do, there is the EurRoma on the south side in the EUR district, and the Porta di Roma on the northern periphery, said to be the largest mall in Italy.

Haven't visited yet? Have questions about Shopping in Rome? Ask them here!