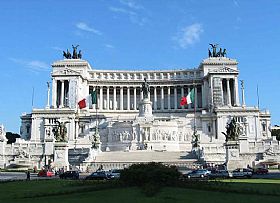 Piazza Venezia is a large space located just behind Campidoglio, at the crossroads between Via del Corso and Via dei Fori Imperiali. Piazza Venezia has been renovated with the current look at the end of the XIX century.

The piazza is delimited by Palazzo Venezia, Palazzo Bonaparte, Palazzo delle Generali and is overlooked by the majestic white mass of the Monumento a Vittorio Emanuele II.This neoclassical monument, also known as "Il Vittoriano", was built in 1885 by Giuseppe Sacconi in honour of Vittorio Emanuele II di Savoia, first king of the united Kingdom of Italy. A large staircase takes to the Monumento al Milite Ignoto (monument to the unknown soldier), also called Altare della Patria, where it was buried a soldier died during the First World War, to commemorate and remember the numerous deaths remained without a tomb or simply unidentified. Inside the Vittoriano you will find the Central Museum of Risorgimento.

Palazzo Venezia, which spread out its popularity because of the historical Mussolini's speeches to the population, is actually an important Renaissance building, erected for want of Pope Paolo II Farnese, It now homes a Museum of Minor Medieval Arts, exhibiting enamelwares, ivories, inlay works, jewels, a collection of bronzes and Renaissance ceramics.

Haven't visited yet? Have questions about Piazza Venezia? Ask them here!