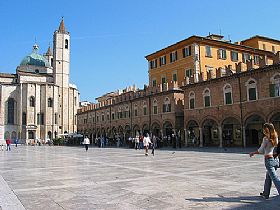 Widely considered to be one of Italy's most beautiful piazzas, Ascoli Piceno's Piazza del Popolo is a travertine-paved jewel. In the very center of the city, this is Ascoli's living room, where kids play, old men talk politics, families stroll, and romance blossoms.

Outlined by beautiful buildings, the piazza is contained and free of traffic, leaving a gleaming floor of marble-like stone that glistens in the sun and moonlight. With the massive church of San Francesco on one end, the imposing Palazzo dei Capitani, the historic Caffe Meletti, and arcaded buildings holding shops and cafes, it's a delightful spot to linger.

The Palazzo dei Capitani was built in the 1300s and was seat of the city from 1400 until 1564, where the "captains" of the city lived and ruled. There are Roman ruins below it that you can tour, and the palazzo frequently hosts art exhibits. Walk into the pretty arcaded courtyard.

Sit and enjoy the view in the piazza, with its proportions, symmetry and porticoes, and you'll see why even Italians stand and gape at their first sight of it, and declare it "the most beautiful piazza in Italia!"

Haven't visited yet? Have questions about Piazza del Popolo? Ask them here!