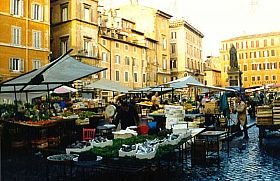 The colorful Campo dei Fiori is Rome's best known street market. The odd-shaped piazza's name means "field of flowers"; now it plays host to a riot of flower bouquets along with a cornucopia of fruits and vegetables, sold from pushcarts and tables to hungry Romans and eager tourists every day since 1869. Before that, it was the site of a weekly horse market in the Middle Ages. The neighborhood was a haven of craftsmen, as evidenced in the surrounding street names: Via dei Chiavari (key makers); Cappellari (hat makers); Giubbonari (tailors) and Baullari (crate makers).

The Campo dei Fiori was originally an unused field between Pompey's Theatre and the Tiber River. The working class neighborhood went upscale in the Middle Ages when the Farnese family built their palazzo nearby and Orsini family renovated their residence on the piazza. The piazza was paved in 1456 and the area built up, adding more housing and streets. It was the scene of public executations, including the high profile burning of philospher Giordano Bruno, condemned for heresy. After the Unification of Italy, a monument was erected in his honor, with his statue looking defiantly in the direction of the Vatican.

Today, it's ablaze with life at all hours of the day and night. There are cafes, bakeries and nightspots around the area, and it's just a few minutes' walk to Piazza Navona and the Pantheon from here.

Haven't visited yet? Have questions about Campo dei Fiori? Ask them here!