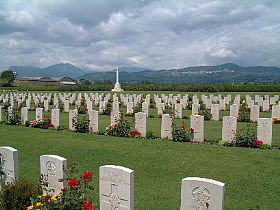 This peaceful grassy expanse is the final resting place for 1,846 Commonwealth soldiers killed in World War II. An Allied invasion of southern Italy was planned to drive the German forces north and re-take Rome. In September, 1943, the beach-head landings took place in Salerno and Anzio, dubbed the D-Day of Italy as they had to arrive by sea and fight their way ashore and inland. Fierce battles followed the invasion, costing scores of lives.

Here, in this peaceful place that is considered hallowed ground, the remains of soldiers from England, Canada, South Africa, Australia and India are laid to rest with military solemnity. Inscriptions chosen by the families give touching tributes. The remains of American troops from these battles are eternally interred at the Sicily-Rome American Cemetery in Nettuno, north of Naples.

The Salerno War Cemetery is located 14 kilometers north of Salerno between Battipaglia and Pontecagnano.

Haven't visited yet? Have questions about Salerno War Cemetery? Ask them here!

Have you seen our self-catering apartments in Salerno?