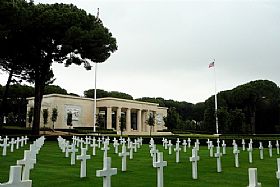 Take a day trip from Rome to experience the important events of World War II at the Sicily-Rome American Cemetery in Nettuno. Set on 77 acres, the manicured grounds are considered hallowed ground, the eternal resting spot for thousands who died in battle on Italian soil.

The peaceful park commences with a circular reflecting pool containing an island flanked by Italian cypress trees. From there, the lawn spreads out over the gently sloping landscape where the field of perfectly positioned headstones mark the graves of 7,861 American servicemen who died in the liberation of Italy from the Nazi forces. The soldiers served in several key battles: the liberation of Sicily (July 10 - August 17, 1943); the landing at Salerno (September 9, 1943); the northward march toward Rome where they became bogged down at the Gustav Line and the famous battle of Montecassino; and finally, the decisive landings at the beachheads of Anzio and Nettuno (January - May, 1944). These landings allowed for the liberation of Rome on June 4, 1944.

A marble Memorial Building contains a chapel; the ceiling is decorated with the constellations as they were at the time of the Allied landing here. The walls are inscribed with the names of the 3,095 missing; rosettes mark those that were later recovered and identified. A Map Room depicts the military operations in Sicily and Italy. Alongside the Memorial Building is a garden with hedges and roses. The poignant bronze statue of two soldiers with their arms link is titled Brothers in Arms.

The cemetery is tranquil and shaded by umbrella pines; it is moving to walk among the thousands of aligned headstones and contemplate their sacrifices here. It is especially emotional on Memorial Day when the observances bring together Italian and American military forces to pay homage to the fallen.

The Sicily-Rome American Cemetery is open daily from 9:00 am til 5:00 pm (closed Christmas and New Year's Day). There is always staff on duty to assist and answer questions. The cemetery is overseen by the American Battle Monuments Commission. It is located in Piazzale John Fitzergerald Kennedy, at the edge of the seaside town of Nettuno, 38 miles south of Rome. Commuter trains from Rome arrive frequently, and it's a short walk from the train station to the cemetery.

Haven't visited yet? Have questions about Sicily-Rome American Cemetery? Ask them here!