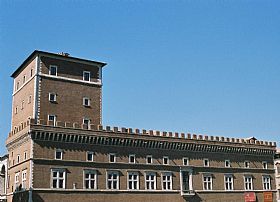 Palazzo Venezia is a famous building on the piazza of the same name, in the heart of Rome. The medieval era fortified structure has a square tower and is located across from the Capitoline Hill. It was a papal palace and residence of cardinals until Pope Pius IV, trying to curry favor from Venice, handed it over to the ambassadors of the Most Serene Republic, with the stipulation that part of it remain set aside for the cardinals (at the upkeep and expense of the Venetian Republic!) It was also home to the Cardinal of St. Mark, who tended over the basilica of San Marco and was by tradition, always a Venetian.

It is said that the palazzo was built mostly with stone scavaged from the nearby Colosseum. There is a loggia-lined courtyard at its center. The palazzo became famous in modern times when it was taken over by Mussolini as his headquarters, and he used the balcony facing the piazza to deliver his speeches. Today, Palazzo Venezia houses an impressive collection of artwork and decorative items.

The Museo Nazionale di Palazzo Venezia gathers a vast number of paintings, tapestries, sculptures ceramics, religious objects and furnishings, primarily from the Medieval and Renaissance eras but also some ancient pieces. It is worth a look while in the center of Rome.

The National Museum of Palazzo Venezia is located at the corner of Piazza Venezia and Via del Plebiscito, just across from the Victor Emmanuel memorial in Rome. It is open Tuesday to Sunday from 8.30 AM to 7.30 PM

Haven't visited yet? Have questions about Palazzo Venezia National Museum? Ask them here!