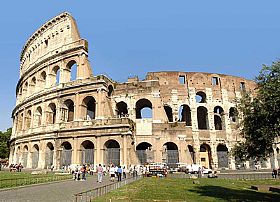 The Colosseum is definitely the Roman monument par excellence, one of the chief highlights of the Eternal City.

The solemn travertine brick construction was made in a valley among the Roman hills of Palatino, Esquilino and Celio, after reclaiming a small lake, used by Nero at the Domus Aurea.

It is a four-floor edifice, 45.5 metres high, whose extension includes an elliptical area of about 19000 square metres. The first floor measures 10.5 metres with Doric columns; the second one, two metres higher than the first, is composed by Ionic pillars; the third floor, 11.6 metres high, shows Corinthian columns while the fourth is a brickwork with small square windows. The latter is provided with the characteristic holes, anciently used to support the velarium's beams in order to protect the spectators from the hot summery sun.

The Colosseum (Italian Colosseo) was a sort of Roman microcosm, able to seat 40000 to 60000 people, divided into sectors which were accessible through staircases and galleries homing, during the shows, merchants selling chickpeas, drinks and cushions.

Along the terraces, among the seats assigned to senators and members of the court, it was built, for want of the Emperor Augustus, the "Emperor Platform" - called pulvinar. The king accessed the platform through a private underground passage, known as the "Path of Commodus" because of an attempt made on Commodus' life right there.

The Flavian Amphitheatre – so-called as it was built and finished in 80 AD for want of the Flavian dinasty (Vespasian, Titus, and Domitian) - was an elliptical arena was covered by a wood floor covered with sand. There were to main gates: Porta Triumphalis on the western side, access for gladiators and beasts; Porta Libitinensis on the eastern side, where the lifeless bodies were carried away.

Below the arena there was a number of corridors and various rooms used to house gladiators and wild animals which were lifted up through elevators and flights. Outside you will be able to notice some inscriptions made to remember the strengthening works and, most of all, the prohibition of plundering any further the monument (sanctioned by Pope Benedict XIV, whose pontificate lasted from 1675 to 1758).

What remains of the original Colosseum is enough for any visitor to appreciate and get a good idea of the building proportions and importance. However, a walk around the exterior of the Colosseum illustrates just how much of the building was removed to add to other construction projects in the ancient city.

A visit to the Colosseum has to be well planned in advance since it is one of the biggest draws for tourists in Rome. During the peak summer tourist times tickets to the site do sell out, and guided tours in English are booked for weeks in advance. Even if you are planning a travel agent free trip, we highly recommend finding a travel company for the day to set up your visit. Regular admission to the Colosseum is 10 Euro and includes admission to the Hill. Hours change with the season, so check the times depending on when you expect to visit. For an additional fee you can take a guided tour with an archaeologist in English or purchase an audio tour and explore on your own.

Haven't visited yet? Have questions about Colosseum? Ask them here!