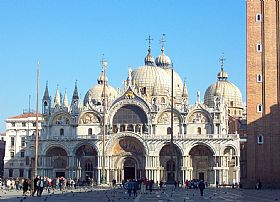 The most recognized building in Venice, the Basilica of San Marco is a stunning architectural gem. Its Eastern influenced facade has a magical appeal with its forest of spires, distinguishing domes, and Byzantine arches. It casts a different light throughout the day, making it an ethereal presence in the piazza.

When Venetian merchants pirated the body of St. Mark from its resting place in Constantinople, they hid it under a barrel of pork to avoid detection by the Muslim guards,according to legend. Venice needed a new church to house the renowned relics they had just acquired and constructed a Greek cross plan. It was burned in a rebellion but was rebuilt in 1071, maintaining the original footprint but adding adornments to achieve the Byzantine style it now boasts, basing the design roughly on the Church of the Holy Apostles in Constantinople. Columns, capitals and friezes from the Orient came with merchants of the dominating Republic to decorate he cathedral.

St. Mark's is a virtual kaleidoscope of colorful mosaics, depicting stories from both the Old and New Testaments, most of the gilded, resembling a golden treasure chest. The soaring interior has an amazing feeling of space of light. There are more than 45,000 square feet of mosaics in all! Above the main entrance are bas-reliefs from the 13th century representing the months, the virtues, the prophets, and the most common trades in Venice at the time.

Outside are marble-faced arches and innumerable columns, with lace-like marble decoration, all capped off with five enormous domes. The bronze horses and are very well traveled: they came from Constantinople in 1204 but are of Greco-Roman origin, having been looted in the 4th crusade. They were carried off by Napoleon in 1797 and then returned to San Marco in 1815. In the 1990s, they were placed inside the the upper gallery for protection and can be viewed for a small fee.

Haven't visited yet? Have questions about Basilica of San Marco? Ask them here!