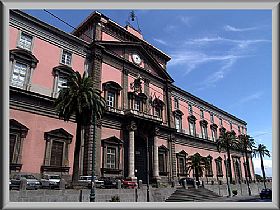 The Museo Archeologico Nazionale in Naples holds Italy's vastest and most prestigious collection of artifacts. It was one of the first archeological museums in Europe, with priceless pieces from the ancient world and the Bourbon era.

Housed in a 16th century palazzo, the building's construction was originally destined to be a royal stables, ordered by the Viceroy of Spain in 1585. It was later decided to be transformed into a center for studies with the work being directed by architect Giulio Cesare Fontana between 1610 and 1615. It remained a university until the 1780s when King Ferdinand IV decided to create an institute for art and antiquities, and inaugurated the Museo Borbonico and Royal Library in Naples, the throne of the Kingdom of Naples. He moved the vast Farnese collection here, accumulated by Elisabetta Farnese, the mother of King Carlo III. The museum opened to the public in 1801.

The museum is home to an amazing variety of ancient artifacts: the Farnese family jewels; everyday household items and sculpture from Magna Grecia; ancient scripts inscribed in stone in Greek and the local ancient Italic language; relics from ancient Egypt; Roman busts; an impessive rare coin collection; and sculptures that once decorated the Baths of Caracalla in Rome. But the most impressive part is the collection unearthed locally - the frescoes and mosaics found intact at Pompeii, public art from Herculaneum, sculptures and temple decorations from both Roman cities buried in the eruption of Mount Vesuvius.

This grand assemblage of antiquities should be on the must-see list of anyone visiting southern Italy, especially after a visit to Pompeii or Herculaneum.\

Haven't visited yet? Have questions about National Archeological Museum of Naples? Ask them here!