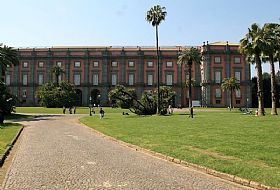 A splendid hilltop palace with expansive views and glorious grounds also contains southern Italy's most impressive art collection. The former Palazzo Reale di Capodimonte was built by King Carlo of the House of Bourbon as his hunting lodge, a royal residence among forests on the highest hilltop in the area. It looks out over Naples and the entire gulf and is worth the trip for the views and gardens alone.

But inside the regal rooms is an astounding display of masterpieces, accumulated by the noble Farnese family and donated to the state in 1920. The collection was started by Alessandro Farnese and passed down; King Charles inherited it from his mother, Elisabetta Farnese, the last in the line, and moved the priceless works from Rome to this palace during his stint on the throne of the Kingdom of Naples. The result is the most important art gallery in southern Italy, with masterpieces by Titian, Caravaggio, Raphael, Bellini, Masaccio, Lorenzo Lotto, Luca Giordano and more. There are fancy 18th century furnishings, and pretty porcelain and maijolica from local manufacturers.

The museum hosts special events like Jazz in the courtyards and traveling exhibits. The palace occupies a spectacular site on the summit, surrounded by lawns and woods and is a peaceful respite from the noise of Naples.

The Museo Nazionale di Capodimonte is open from 8:30 am to 7:30 pm; closed Wednesdays.

Haven't visited yet? Have questions about National Museum of Capodimonte? Ask them here!

Have a look at our vacation villas in Naples.