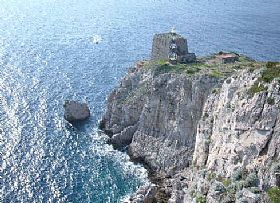 The reserve comprises the coastline that extends for 30 Km from Punta del Capo (Gulf of Naples) to Punta Germano (Gulf of Salerno) and includes a charming succession of grottoes, inlets and bays. A few miles off the coast, small reefs scattered here and there (Vervece, Vetara, Isca and Li Galli) are corners of paradise for scuba divers. Punta Campanella natural reserve abounds with Mediterranean maquis trees and flowers. The greenery of the coast extends even underwater, with multicoloured seaweed and a rich marine fauna. The calcareous nature of the rocks has favoured the formation of grottoes and caverns of great interest!

One of the most interesting itineraries in the heart of Punta Campanella Reserve, starts from the marvellous village of Nerano, hamlet of Massa Lubrense, and goes down the the beach of Jeranto. A six kilometres long excursion suitable even for beginners, winding from the main piazza in Nerano. Mount Costanzo's shadow offers chilliness and shelter from the hot summer sun. Turn into Via Jeranto, a lightly steep paved street from where you will suddenly admire the archipelago Li Galli, anciently called Sirenuse - as it was believed to be the land of the Sirens. The street leads to the entrance of Villa Rosa, where the famous writer Norman Douglas stayed for a while: take your time to look up to the Bay of Cantone, a large sandy coastal stretch close to a fascinating seafaring hamlet. Go down, penetrating step by step into a thick vegetation, among carobs, durmasts and euphorbias, appreciating the hard work made to terrace the soil and cultivate precious olive groves at the foot of the mountains, just a stone's throw from the sea. The slope to the calcareous mountainsides of Mount Costanzo becomes steeper and steeper, while among wild figs, it opens a glimpse to Mortella Beach, today accessible by sea only. The stunning promontory of Mount Alto overlooks the landscape with the sighting tower built at the time of the viceroys in Naples.

The panorama includes the whole coastal stretch from Punta Campanella to Punta Penna, with Capri and the stacks in the background. From above, the peninsula looks like three talons of bird of prey, explaining the toponym Jeranto (from the Greek Jerax, predator). You will be able to watch the elegant movements of kestrels, buzzards and peregrine falcons. The latter is the rarest species that is come back to nest within the Reserve. Arrived at the fork you can choose between going down to the sea and reach Jeranto Bay, on the right side, going across a old staircase. On the left there is a dirt path, that after a few metres downhill goes to the Tower of Mount Alto. Thanks to the exceptional rescue operations by the FAI (Italian Environmental Fund), Jeranto Bay is the most uncontaminated stretch of the Southern Amalfi Coast. Inhabited from times immemorial, Jeranto is a series of grottoes following one another with bizarre names: Salara, so called because if a sea-salt deposit once located there; Grotta d'a Suppressata, whose stalactites look like the famous local salami, called "soppressata". The biggest one certainly is Grotta Zenzinada, also known as Grotta del Presepe (Nativity Scene Grotto), which penetrates for 20 metres into the rock. Not to be missed is the Sapphire Grotto: brilliant gemstone grotto with a cascade of liquid sapphire flowing like a waterfall reachable by scuba divers just swimming for a few metres.

Haven't visited yet? Have questions about Natural Marine Reserve of Punta Campanella? Ask them here!