The Excavations of Herculaneum 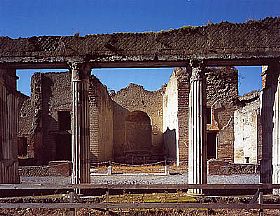 While Pompeii is more famous, the city of Herculaneum was also destroyed in the same eruption, but buried under Vesuvius's spew of ash in successive waves that coated and preserved the city and its contents. The ash and pyroclastic material came in a series of eruptions, which coupled with heat, acted as a preserver of the city, in essence "mummifying" everything, including furnishings, household items and many details that were destroyed by the hot fluid lava at Pompeii. Ercolano, as it is called in Italian, is actually better preserved and more interesting than Pompeii in many ways.

The buried remains were rediscovered only in the 1700s, and the incredibly intact buildings and decorations are awe-inspiring. There is a theater, a basilica and homes richly decorated with intricate mosaics. Civic buildings, public baths, a gymnasium, and villas were covered and conserved in the ash like a city-wide time capsule. The Villa Papiri was so-named because of its wide collection of Greek books, which are now housed in the Biblioteca Nazionale in Naples. Archeologists also uncovered well-kept remains of everyday household items like wine flasks and pottery, giving a glimpse of daily life in the ancient city.

According to legend, Herculaneum was founded by Hercules, originally a Greek city dedicated to that god and called Herakles. It actually dates back to the Samnite tribe that inhabited this area in the 6th century BC, but was founded as a city by the Greeks who established an important trading seaport here. In the 3rd century, the city joined the Nocerina Confederation, and took part into the so-called "social war" against the Roman Empire, but the Romans succeeded in conquering the city, which they then made their own, rebuilt and embellished in Roman style.

If you can visit only one ancient site on your trip, we recommend Ercolano; it is easier to visit, being a smaller city, and the buildings were left more intact, even the upper floors. Herculaneum provides a fascinating glimpse into ancient life during the Roman Empire, and the effects of a catastrophic event that happened in a matter of minutes!

Audioguides, books and guided visits in various langugages are available.

How to get there:

By public transportation: Take the Circumvesuviana from the Railway Station in Naples and stop at Ercolano Portico, once there just follow the signals.

Haven't visited yet? Have questions about The Excavations of Herculaneum? Ask them here!