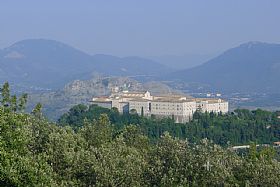 The massive Abbey of Montecassino rests on a bluff at 519 meters above sea level near the town of Cassino, between Rome and Naples. It is the oldest monastery in Italy, founded in 529 by St. Benedict himself. The pious Benedict came here from his hometown of Norcia in search of solitude and a prayerful life, but soon found himself at the center of attention and a monastic movement was started. The first church and structures were built on the site of an ancient tower and Roman temple dedicated to Apollo. Benedict lived out the rest of his life here on this hilltop, writing his famous text, The Rule, a guideline for spiritual life that is still widely read. He died in 543 and was buried here along with his sister, St. Scholastica. He is the patron saint of Europe and the founder of the Western monastic model.

The monastery grew and eventually prospered, becoming Italy's most prominent and affluent. But the Abbey of Montecassino also suffered a series of sackings, earthquakes and invasions through the centuries, always to be rebuilt. The beacon-like structure standing on the hilltop today was rebuilt for the last time following WWII. Montecassino found itself at the center of the world's attention as a theater of war, where the largest and bloodiest battles of the Italian campaign were played out. The Allies had landed in Salerno in September of 1943 and were making their way north toward Rome; the Germans meanwhile had established the Gustav Line which cut across Italy right below at Montecassino. The German defense was steadfast and more resistant than the Allies anticipated and in order to support the landings in Anzio in 1944 the fighting was intense. The bombings of the abbey itself were controversial, as it wasn't known concretely if the Germans had bunkered inside or were using strategic high positions in the hills nearby to launch attacks. The Allies eventually took the hill and moved north to free Rome. The loss of life, of civilians who had sought shelter there, and of the respective troops, were heavy. The Polish Army in particular suffered great losses, and a Polish War Cemetery lies on the hillside below the abbey.

Fortunately, the monks had removed the abbey's artworks, archives and the remains of St. Benedict and St. Scholastica to the Vatican for safekeeping. Following the war, the abbey was rebuilt exactly as it had been using the original plans. Today it is a sacred place, some say hallowed, for its religious significance and for the grave losses suffered here.

The cathedral is a baroque style dome-topped church with stuccoes and adornments. The museum houses art, artifacts, archeology and historic displays.

Haven't visited yet? Have questions about Montecassino? Ask them here!