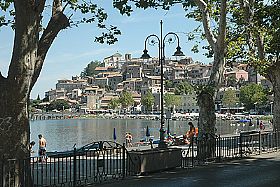 Lake Bracciano is less t han an hour north of Rome but a world away from the noise, traffic and crowds of the capital city. The volcanic crater lake is rimmed with low hills, woods and charming, tranquil medieval towns that sit right at its shoreline. The countryside is beautiful and unspoiled - a nature lover's paradise. The waters of the lake are excellently clean, thanks to environmental initiatives to keep it free from pollution; no motor boats are allowed.

The lake has served as a spa area since the Roman Empire. An aqueduct was built in the 1600s to carry water to the Vatican. There are hot springs in the area, swimming in the lake and water sports such as canoeing, windsurfing and pedal boats. Walking paths lead along the shore and into the hills, perfect for picnics.

The area around Lake Bracciano is a visual lesson in history: there are Etruscan ruins, remains of Roman villas, medieval towns, and Baroque churches.

Three towns sit on the lake - Anguillara, Bracciano, and Trevignano Romano. You'll find charming atmosphere, little shops, coffee bars and restaurants. The local fare centers on freshwater fish like perch and whitefish, as well as mushrooms from the hills. The local white wine is excellent.

Nearby noteworthy towns include Sutri, Bagnoregio, Viterbo, Tarquinia, and Caprarola.

Haven't visited yet? Have questions about Lake Bracciano? Ask them here!