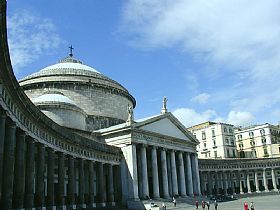 The Basilica of San Francesco defines and outlines the beautiful Piazza del Plebiscito in Naples. It was built between 1816 and 1836, utilizing an existing colonnade, which mimics the one at St. Peter's Basilica in Rome. The dome and portal are inspired by the Pantheon.

The semi-circular colonnade was ordered by Joachim Murat, who also destroyed the monastery of San Francesco di Paola in order to expand the piazza and make it the court of the city. Following the so-called French decade, the basilica was built and dedicated to the saint from Calabria to make amends for Murat's folly. The Bourbon king Ferdinand IV constructed it to honor the saint, while also marking the return of his family to the throne of the Kingdom of the Two Sicilies.

Inside, the dome mimics the form of the Pantheon. The bright, airy interior is decorated in white marble, with an altar that has gorgeous lapis lazuli inlay. There are lovely paintings by Luca Giordano and prominent Neapolitan artists depicting the saints and gospel themes.

Haven't visited yet? Have questions about Basilica of St Francesco di Paola? Ask them here!