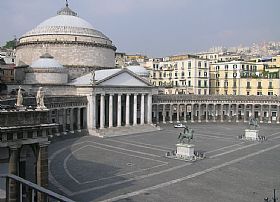 Naples' grandest piazza is the city's gathering spot, playground and central focal point. It is elegant and airy. The enormous open space is a sunny spot in the heart of Naples, known for its tight, narrow streets and population density. Here, people stroll with baby carriages, sit and chat, and soak in the sun.

Piazza del Plebiscito gets its name from the plebiscite held here in October, 1860, which annexed the Bourbon Kingdom of the Two Sicilies, which ruled all of southern Italy, to the Savoys, officially uniting the country to become the Kingdom of Italy. Previously, the piazza was known as Largo del Palazzo, for the dominating Palazzo Reale, the Bourbon's royal palace.

The piazza is home to some of the city's main monuments. Along with the royal palace, there is the domed Basilica of San Francesco da Paola, built to mimic the Pantheon in Rome. The twin pastel palaces, Palazzo della Prefettura and Palazzo Salerno, anchor the square on either side, while two bronze equestrian statues stand guard in the midst, one dedicated to Charles III of Spain, the other a representation of Ferdinand I. The celebrated Gran Caffe Gambrinus sits in the corner of Palazzo della Prefettura.

A curving colonnade embraces the piazza, similar to the great colonnade of Bernini in St. Peter's Square in Rome, giving an intimate feeling to the spacious square. The piazza is slightly slanted, and its overall effect is of an opera-like theatrical setting, which is appropriate since it is the stage for concerts and civic events throughout the year.

Just steps from Piazza del Plebiscito is the famous Teatro di San Carlo, Castelnuovo, and the characteristic Quartieri Spagnoli. The piazza is a must-see stop on any trip to Naples.

Haven't visited yet? Have questions about Piazza del Plebiscito? Ask them here!

Enjoy the comfort of a home rental in Naples.