Things to do with your kids in Campania 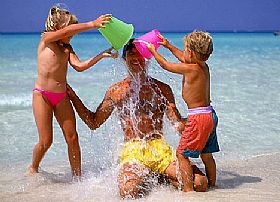 If you are wondering if Campania, the region of Amalfi, Sorrento and the Cilento National Park has enough to offer to entertain your kids, the short answer is: yes! For the long answer just keep reading :-)

Even children with no interest in history or art will marvel at how much there is to see in Campania. It is amazing how history comes alive when walking the ancient streets of Pompeii or Herculaneum, or visiting the Royal Palace of Caserta. When history is right in front of you, big as life, learning becomes a byproduct of having fun. The great sea and the beaches specially in Capri, Ischia and the Bay of Naples are well known and well equipped for families.

Things not to be missed:

Royal Palace (Palazzo Reale), Caserta - In Star Wars Episode I, the inside of Queen Amidala's palace is really the Royal Palace at Caserta. The movie was filmed at Caserta for the interior shots of the palace. This 18th century palace, built by Charles IV (Charles III of Spain) rivals Versailles in size and luxury it's bigger.

Like Versailles, the gardens cover a large area, with forests, ponds, waterfalls and fountains. Look for the castle that was a playhouse for the princes. If you get tired running around the gardens, hop on the mini-bus that circles the park.

Solfatara Volcano (Pozzuoli) - Solfatara Volcano is a big wide shallow crater, with bubbling mud pools, steaming fumaroles and yellow and red encrustations from the sulfur. Long a popular spot with travelers, Solfatara was thought to be the entrance to hell by the Romans. Famous as a spa since the middle ages, people came to the volcano for the sulfurous waters. (All the bubbling pools and steam jets are fenced off.)

Cave of the Sibyl, Cuma - Cuma (or Cumae) conjures up stories from Virgil's Aeneid. In the story, the Trojan Aeneas is instructed by his dead father to stop at Cumae, where Aeneas consults Sibyl, the oracle of Apollo, in her cave. Looking down the long gallery in the cave, it's easy to imagine the mysterious Sibyl in the shadows.

Island of Ischia - Take a scenic boat trip to Ischia, the largest of the islands in the Bay of Naples. Spend the day relaxing on the long sandy beaches (Maronti is the longest), or in the thermal springs. Visit the dramatic Castello d'Ischia, a 14th century castle in the Spanish style, perched on a rocky promontory overlooking the sea.

National Railway Museum of Pietrarsa (Museo Nazionale Ferroviaria di Pietrarsa) - Situated between Naples and Portici, the National Railway Museum is located on the site of the original factory where locomotives were built in the 19th century. The Museum has an extensive collection of steam and diesel locomotives in pristine condition, as well as elegant dining cars and train models.

Amalfi Coast - The Amalfi Coast is famous for it's vertiginous cliffs and spectacular scenery. There are good swimming beaches sprinkled up and down the coast. Most charge a fee for access to the beach. Visit the Emerald Grotto (Grotto dello Smeraldo) you take an elevator down to the cavern and a boat ride through the green waters. Splurge on a submarine ride on the "Tritone" around Capri, exploring the underwater scenery.

Paestum - Paestum is a little bit of ancient Greece in Italy. Poseidonia was founded by the Greeks in the 6th century BC, later the Romans called it Paestum. Today Paestum has three majestic Doric temples with fat cigar-shaped columns to run around and lots of open space. Take a picnic. Paestum is also a beach resort, so plan to spend some time relaxing at the seaside.

Museo Archeologico Nazionale (National Archaeological Museum of Naples) - The National Archeological Museum has all the good stuff from Pompeii and Herculaneum. The collection includes Greek and Roman sculptures, a famous mosaic of Alexander the Great, arms and gladiator's helmets, silverware from homes in Pompeii, plus the Medici collection of cameos and engraved gems (a must for anyone who likes jewelry). Don't miss the detailed model of Pompeii on the first floor.

Villa Comunale and Aquarium - The Villa Comunale is an old city park along the bay, with lots of shady trees and fountains. In the center of the park is the Aquarium (Aquario). The Aquarium is old fashioned in that 19th century style, but it does have tanks with local marine life from the Bay of Naples. The park extends for nearly a mile along the water, so enjoy the pedestrian promenade on the Via Caracciolo.

From the Villa Comunale, head down the via Partenope towards the imposing Castel dell'Ovo. Castel dell'Ovo (Castle of the Egg) sits out on a little island surrounded by a marina. Wander around the marina and watch the boats go by on the bay.

The Catacombs of San Gennaro - Naples is famous for the festival of San Gennaro (St. Januarius) where the blood of the saint miraculously liquefies. San Gennaro was originally buried in these catacombs, which are usually light and airy. The walls decorated with frescoes of the saint. (The entrance to the catacombs is to the left of the church of the Madre del Buon Consiglio.)

Capodimonte Observatory - This astronomical observatory is the oldest in Italy. The Observatory has an historical museum with a collection of astronomical instruments - old brass and wooden telescopes, clocks, and an exquisite 16th century gilt-covered celestial globe. From the observatory there is a wonderful view of Naples and the bay. Near by are the neat Capodimonte Gardens (Parco di Capodimonte).

Pompeii - There's something about a ghost town that's very appealing. Pompeii has a lot to see, so take your time. Check out the baths for ideas on remodeling your bathroom at home. The civic and theater areas are good for a run. A personal favorite is the Villa of Mysteries. Hire a good English speaking guide to get the scoop on all the ruins.

Climb to the top Mt. Vesuvius - A road leads most of the way up, and it's not a long climb to the top (650 feet up). The trail is well maintained, but good shoes are a must. The inside of the crater is awesome and from the top of the volcano, it feels like you're on top of the world.

Herculaneum (Ercolano) - Like Pompeii, Herculaneum was also buried in the ash and mud from Mt. Vesuvius in 79 AD. Many private houses have been preserved, as well as shops, such as a wine shop with wine jars on the counter. Don't miss the House of Neptune and Amphitrite with its graceful mosaics on the walls.

Did we list it all? I doubt it, but hopefully we gave you enough pointers to keep your children busy for a fortnight! 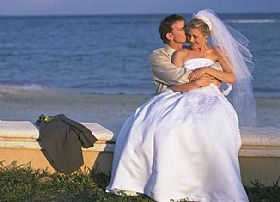 Getting married in Italy: Tips to Get You Started
And so you are making plans to have your wedding in Italy: congratulations! 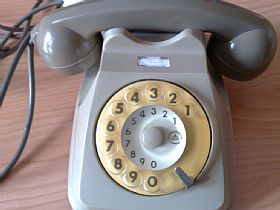 How to Call Italy From the United States of America and Canada
Even though you will not need international calling skills to contact Summer In Italy (we provide a USA/Canada toll-free number for your convenience, and a toll-free fax number as well), there is still a good chance that as you plan your vacation you find yourself in need to place a few phone calls to bella Italia (to book a tour, a private transfer, or maybe a table at a restaurant). 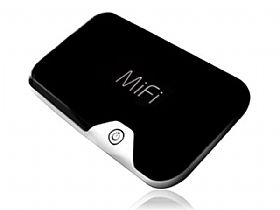 Mobile Broadband for Italy
It used to be that people would inquire about cellular service for Italy. 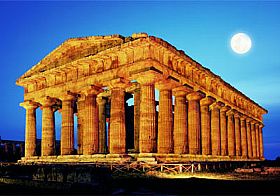 No Toga Required
Throughout the month of August you can experience the majestic ruins of Paestum in a whole new light. 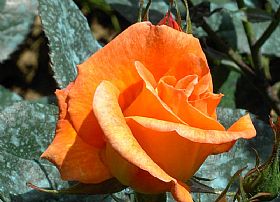 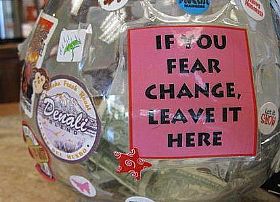 Tipping in Italy
This topic has always been much debated -- but people continue to weigh in on tipping versus not tipping. 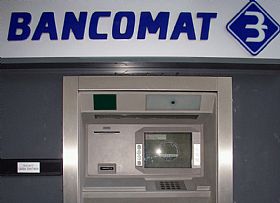 Using ATMs in Italy
Bancomat (pronounced with long "a"s as "Bahn-ko-maht") is the name of the automatic systems for collecting cash from your bank account in Italy and in many European countries. 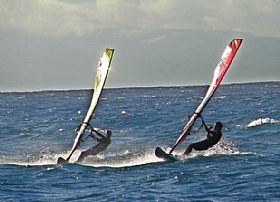 Windsurfing in Campania
Windsurfing is an exilarating sport, an experience that defines emotion and life! 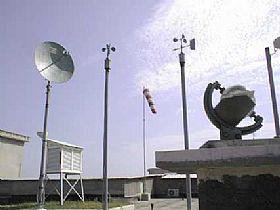 Average temperatures in the Amalfi - Sorrento - Cilento area
There are two very common questions, in planning a trip to Italy. 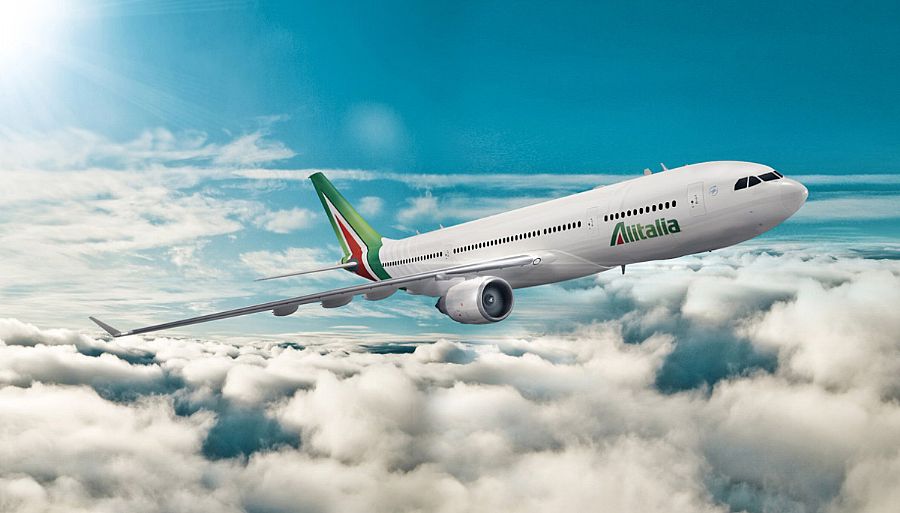 Cheap airfare to Italy
If you are looking to buy airfare from North America to Italy, there might be times when you would start thinking that airlines have gone crazy with the price of flight tickets, and that there are no cheap flights or discount offers available. 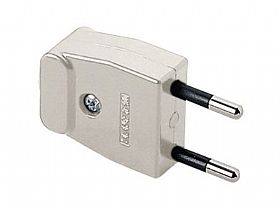 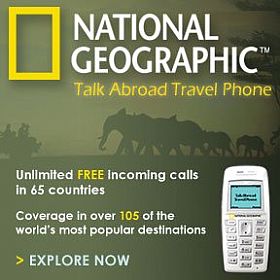 How to Get Affordable Cell Phone Service for Italy
Most rental villas or apartments do not come equipped with a land line phone for guests to use. 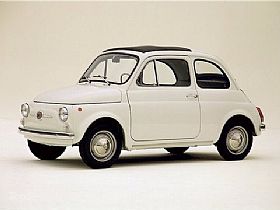 Car rental
If you are planning to hire a rental car for your stay in the Amalfi/Sorrento/Cilento area, chances are that you might be wondering whether we have special advice on local agencies that offer good rates. 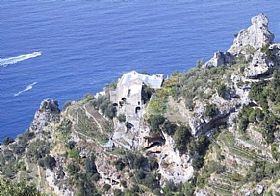 Walking Around the Amalfi coast, Sorrento and Capri
Unknown to most tourists, wonderful networks of footpaths criss-cross the peninsula and Capri, connecting little villages by easy paths and venturing on rougher ways up into the mountains. 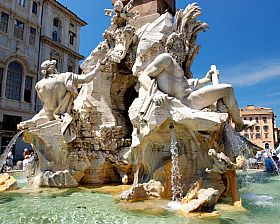 Alternative Rome: a day to kill in Rome
Rome, from a tour guide's perspective: Relax, have your first cappuccino, walk around via Condotti, Spagna, Navona, Trevi, Pantheon, Corso Visit the Roman forum, Palatine hill, Colosseo Spend all day at the Vatican museums The above is the standard itinerary that pre-occupies all visitors to Rome-"Can we do it all in two days?