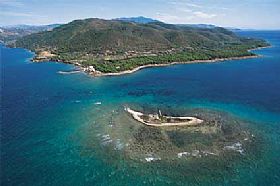 A delightful point on the Cilento coast is Punta Licosa. Named for the siren Leucosia from Homer's epic, Odyssey, who is said to have been one of the three sirens (or mermaids) whose songs lured sailors to shipwreck on the rocks. Odysseus had to be tied to the mast to keep from succumbing to their melodic allures. The mythical Leucosia, after failing to bring destruction to Odysseus, was thrown into the abyss of the sea and washed up on an island which was named after her.

Located off the tip between San Marco di Castellabate and Ogliastro Marina, there is a lighthouse on the little island that stands guard to keep sailors safe. It is a Marine Protected Reserve with regional Mediterranean shrubbery and foliage, including carob, pines, and mastic. A trail follows the waterfront under a canopy of shady trees offering panoramas of the bay and Punta Tresino, on the other side of Santa Maria di Castellabate. On clear days you can see the Amalfi Coast and Capri.

One trail leads from the pretty port in San Marco di Castellabate, where there are remains of an ancient Greco-Roman seaport. It passes villas and a tiny borgo (hamlet) along the way to Punta Licosa. The other leaves from Ogliastro Marina and curves around the waterfront to the island point. Both paths are easy walking; you'll need about two hours to arrive at Punta Licosa.

Haven't visited yet? Have questions about Punta Licosa? Ask them here!