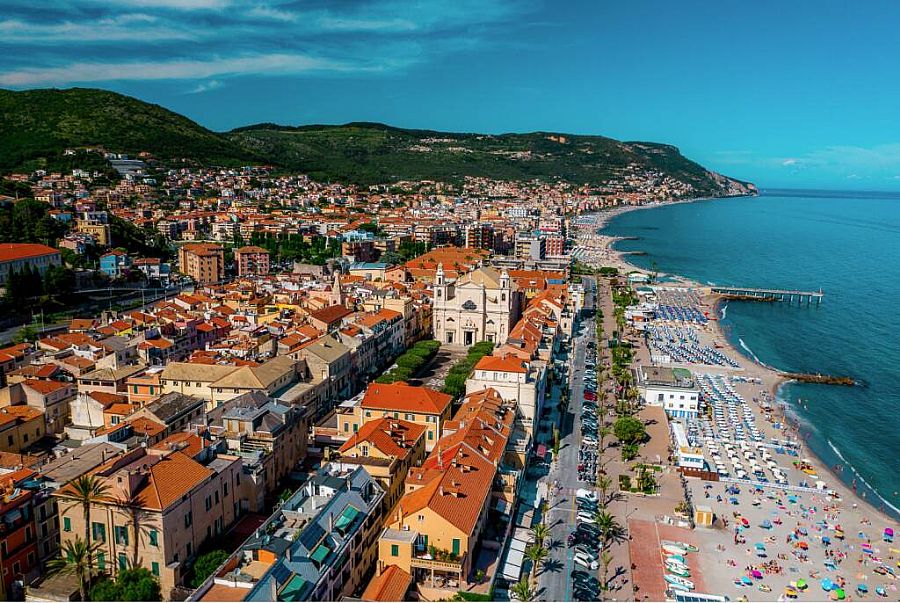 Between the cities of Genova and San Remo, Pietra Ligure sits on the Italian Riviera, its old fishing town melding nicely with modern beach resort. While the town settlement goes back to the 12th century with the construction of the castle, there are signs of ancient habitation here, in the caves on Mt. Trabocchetto, and Iron Age tombs, along with Roman coins. The Liguri people sided with Carthage in the 2nd Punic War, and Rome was not happy. The castle was built by the Bishops of Albenga who used it as their summer residence, and the Lombards built the borgo (hamlet) around it. The town grew in the Middle Ages and beyond, and the Borgo Vecchio with its tall, slim, pastel buildings is a charming element of Pietra Ligure. It was part of the mighty Republic of Genova for centuries.

Located between the mountains and the sea, it is largely protected from the winds. The main piazza is outlined in sculpted umbrella pines and dominated by the basilica dedicated to San Nicolo' di Bari (St. Nicholas). Of course, visiting the cathedral is a must for its lofty ceilings and pretty artwork; it is revered by the residents. The Oratorio della Concezione is another interesting space that was built as a Romanesque church in 1384 on the remains of an earlier church. Today it is an auditorium. There are palaces from the Renaissance era, and narrow medieval lanes topped with arches and Old World magic to wander. This is a pretty town to wander and discover!

The castle has been protecting Pietra Ligure for a millennium, so definitely worth a visit. And of course, the majority of people come for its seaside ambiance and the long sandy beaches. They are fine sand, with crystal waters, and oh-so-inviting!

There are some intriguing events, too. The Confuoco is held on the Saturday before Christmas, with a bonfire of laurel branches in the piazza. It dates to when they would pay their annual homage to the lords of Genova. The Miracle of St. Nicholas started in thanks after the population was decimated by a plague in 1525. The remaining residents locked up the town's gates and left the keys in the hand of the icon of the saint, and fled to the nearby mountains. They built huts (baracche) so even today that area is called Baracchini. On July 8 they heard the town's bells tolling the festival ring, and all were amazed, since they'd left nobody behind. They arrived to find a cloaked apparition that tradition says was St. Nicholas. From then on, they celebrated the day and do so by ringing those original bells, forged in 1505. There is also a solemn procession that carries the saint's statue around town. The Infiorata of Corpus Domini is pretty, with art-work on the streets created from flower petals and seeds.

In addition to the beautiful beaches, the town has a shipyards and boat marina, so you may want to rent or hire a boat to see the coast from the water.

Haven't visited yet? Have questions about Pietra Ligure? Ask them here!

Ask our staff about self-catering homes in Pietre Ligure.