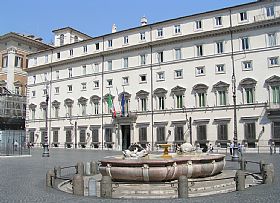 The Renaissance-era palace on Piazza Colonna is home to the Italian Prime Minister, but started life as a noble residence. Built on the Piazza along Via del Corso, it is about half-way between Piazza del Popolo and Piazza Venezia, in one of Rome's most bustling areas. Started in 1562 for the Aldobrandini family, the design was by Giacomo della Porta and then completed by Carlo Maderno in 1580. It was sold to the prominent Chigi family in 1659 (pronounced "kee-jee"). It was famous for its Chigi Library, with thousands of manuscripts (now in the Vatican). The ordered design of the five-story structure is typical of the Renaissance period. It boasts a grand staircase and an internal courtyard.

The palazzo was utilized as the Austro-Hungarian Embassy starting in 1878 and then became a government building in 1916, first housing the Ministry of Foreign Affairs. Since 1961 it has been home to the Council of Ministers, the head of which is the Prime Minister, who is also the elected head of the Italian government.

Stop in front of the palazzo to gaze upon the remarkable reliefs that adorn the Column of Marcus Aurelius, which gives the piazza its name. The deep carvings depict the emperor's northern war, where he died in 180 AD. The figure atop the column isn't Marcus Aurelius, however; his statue was replaced by one of the Apostle Paul.

Get in touch with Palazzo Chigi to request more info

Your message has been sent to Palazzo Chigi.

Please note that requests are sent directly to Palazzo Chigi. It will be their responsibility to promptly answer and get back to you with further information.

Haven't visited yet? Have questions about Palazzo Chigi? Ask them here!