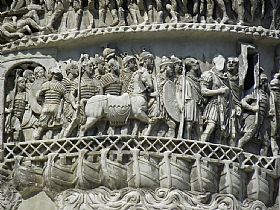 A monumental triumphal column rises in the center of Rome to pay homage to an emperor. The column dedicated to Marcus Aurelius, also known as the Aurelian column, was carved and put in place between 180 and 193 AD. The Roman victory monument commemorates Marcus Aurelius's imperial campaigns in the north.

Located in the piazza named for it, Piazza Colonna, bordering Via del Corso, the column is built of 28 blocks of marble, hollowed out with a spiral staircase inside to reach the platform at the summit. The entirety of the column is carved in deep, detailed relief to depict the military campaigns that it heralds, with unusual depth and intricate design. The carvings give a glimpse of Roman engineering, warfare, military dress and weaponry. There are five narrow slots cut into the stone to permit light to pass to the interior staircase. A statue of the emperor once decorated the top, but it was surplanted by a likeness of St. Paul placed there in 1589.

Piazza Colonna is also home to Palazzo Chigi, the official residence of the prime minister and the seat of Italian government, making it a busy place where you're likely to see reporters, dignitaries, military police and politicians on any given day.

Haven't visited yet? Have questions about Column of Marcus Aurelius? Ask them here!