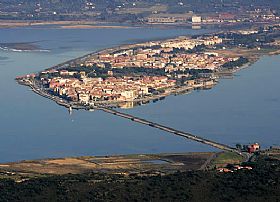 Orbetello is a sliver of a peninsula with and island feel. It's swaying palm trees, golden beaches and laid-back atmosphere seem like something in the Caribbean, but it's located in a lagoon off the Tuscan coast. The Maremma region of Tuscany is an unspoiled playground of beaches, nature preserves and archeological areas. Pine forests line the shore and the promontory of Monte Argentario provides a dramatic foreground.

Orbetello is a cute coastal town, backed by hills and fronted by the lagoon with the sea beyond. The village is completely pedestrianized, making it a safe and charming place to wander through the narrow streets while soaking in the atmosphere and sun. There is a peppy piazza with ocher buildings decorated with awnings and vine-festooned doorways. Attractive tables are sprinkled around for outdoor dining. The main corso is lined with interesting shops. There is a plethora of restaurants and caffes and a handful of discos.

The protected harbor has long made Orbetello a important trading port. The town has Etruscan roots, and the remains of the ancient walls bear testimony of its history. It was taken over by the Romans in 280BC then passed around through the centuries like a prize among the various noble families and ruling powers of central Italy, including the Aldobrandeschi, the Orsini, and the city-states of Orvieto and Siena.

Sights to visit include the cathedral dedicated to Santa Maria Assunta, a simple Gothic church constructed in the 1300s that houses splendid frescoes. The old gateway in the city walls remains as a regal entry-point. The Palazzo del Podesta' was the seat of power and anchors the main piazza. The Spanish Castle is a fascinating fortress rising in the midst of a nature park, which also a butterfly garden and forest. An old stone Spanish-built circular windmill stands surrounded by water as a beautiful backdrop. There is an archeological museum and the important hilltop archeological park that contains the remains of the Roman town of Cosa.

The Maremma is particularly known for its natural landscapes and hosts loads of hiking trails and nature parks. It's perfect for bird enthusiasts and bikers. Orbetello is great for water sports, too. Nearby areas of interest include the fantastical Tarot Gardens, the hot springs of Saturnia, and the fascinating stone bluff towns of Pitigliano, Sorano and Sovana. Viterbo and Lake Bolsena are nearby, and Pisa, Siena and Florence are not far afield.

Haven't visited yet? Have questions about Orbetello? Ask them here! 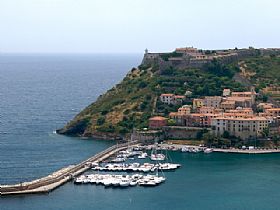 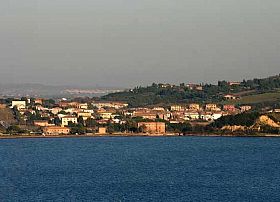