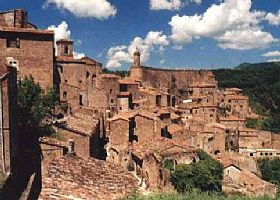 Let yourself be enraptured with the beauty of Sorano... lovely hamlet retreated onto a suggestive tuffaceous steep cliff with numerous slopes. The South of Tuscany homes this charming village (at 170 Km from Florence and 140 Km from Rome), who's history is reach in events and deserved glorious moments: its fortress's remained unconquered for centuries!

Sorano is characterized by a maze of pretty alleys, courts, ashlar portals, external staircases, loggias and cellars excavated into the tuff where, in the past, the locals made their grape harvests. The cellars in Sorano are particularly interesting and some of them have been carefully restored and made visitable. Among those special cellars, we must mention the "Locanda Aldobrandeschi" in via del Ghetto and the lovely restaurant "Hostaria Terrazza Aldobrandeschi", located on top of a tuffaceous spur overlooking the river Lente, from where to admire the colombarium and the necropolis of St Rocco.

Once in Sorano you'll be able to admire the imposing Fortezza Orsini, stunning fortified medieval castle, enlarged by the noble Orsini around the first half of the XVI century. The whole complex is used as Museum of the Middle Ages and Renaissance.

Porta di Sopra is one of the two doors leading to the village of Sorano, preceded outside by a lovely piazza characterized by a system of loggias from where to enjoy a breathtaking panorama. Via Selvi is the main street easily reachable once passed the door: if you are in the mood of doing some nice shopping, here you can find the best craftsmen of the area, beside the first synagogue of Sorano. Every year, from the 10th to the 20th of August, from Porta di Sopra to the lower part of the old town centre, towards Porta dei Merli, there's asuggestive market/exhibition of local handicrafts, where to find any type of "Soranese and Maremmano" craftmade products.

Porta dei Merli, known as Porta di Sotto, is situated at the foot of Masso Leopoldino. It shows a notable ashlar stone frame surmounted by a coat of arms. On both sides of the door you can still admire the vertical openings of the ancient drawbridge. Once passed the door outside the historical centre, you'll see the river Lenge flowing just below the medieval village of Sorano and represents a hugely valuable naturalistic, ambient, historical, cultural and archaeological site.

Masso Leopoldino, typical fortress overlooking Sorano from the opposite side of Fortezza Orsini. Built by the noble family of Lorena during the XVIII century, over pre-existing medieval constructions, the fortress is surrounded by high sloping walls with a huge sighting tower rising from the side. The Masso is one of the main tourist attractions in Sorano, where you'll admire a unique vie of the entire Tufo Area as well as the green hills of Albegna and Fiora.

If you are keen on ecclesiastic monuments, you wont' be disappointed by the three main churches:

Haven't visited yet? Have questions about Sorano? Ask them here! 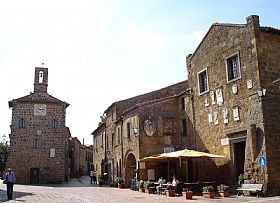 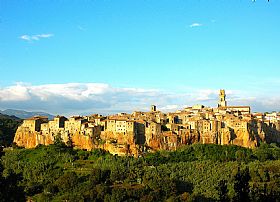 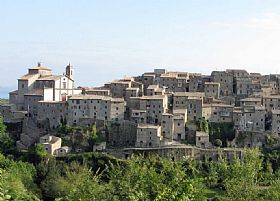