Historical documents and finds testify that Narni, whose primary name was “Nequinum", has been inhabited from the Paleolith. In 229 BC it brought down the Roman Empire, because of the betrayal of two locals. The Romans renamed the city as “Narnia” that, in 233 BC, became a very important fortification, thanks to the construction of the via Flaminia.

Unfortunately we don't have many information about that period, but it is said that Narni used to have a strategic importance during the I and II Punic wars. Indeed nearby the district of Stifone, along the River Nera, close to the ancient port of the city, has recently been found an archaeological site of a Roman shipyard.

During the Renaissance Narni was frequented by the most brilliant and famous artists of the survey, like: Rossellino, Ghirlandaio, Vecchietta, Antoniazzo Romano and Spagna.

In 1527 the city was conquered with a treacherous attack and razed to the ground by the Lansquenets and later rebuilt by artists and architects like: Zuccari, Vignola, Sangallo and Scalza. In 1664 was built the magnificent public library.

In Narni you'll admire numerous astonishing valuable monuments, among which we must mention:

the Romanesque Cathedral, inside which you'll find incredible works of art by Rossellino and other artists;

the Church of San Francesco, dated at XIII century, with unbelievably beautiful frescoes of the local school of art;

Palazzo dei Priori, built in 1275 probably by Gattapone from Gubbio and situated in the homonym medieval square. In this square you will also admire Palazzo Comunale.

Narni has plenty of other notable monuments, like: Palazzo Scotti, frescoed by Zuccari in 1581; San Bernardo Gardens, from which you'll enjoy a gorgeous view of River Nera's valley and have access to the basement of the Church of San Domenico, today seat of the library and the Record Office; the Church of Santa Restituta and its fantastic convent; Sant'Agostino very rich in works of art dated in XIV century and the Church of Santa Margherita with an extremely interesting series of frescoes attributed to Pomarancio.

Narni is lively and enjoyable any time of the year, and if you are fond in music and art, you won't be disappointed by the numerous events and festivals

Here there are some very important annual appointments:

Haven't visited yet? Have questions about Narni? Ask them here! 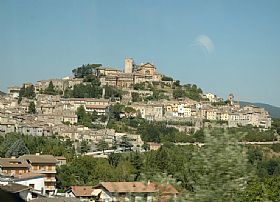 Town of considerable historic and cultural interest, Amelia's one of the most ancient Italian towns.