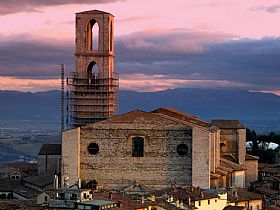 While the Basilica of Saint Francis in Assisi is certainly Umbria's most recognized church, the Basilica of San Domenico in Perugia is the region's largest church. Started in 1304 by the Domenicans as the order began to flourish, it actually took more than 120 years to complete. The original plan was drawn up by Giovanni Pisano. Later interior redecorations were done by Carlo Maderno in the 1600s. The spare exterior has a fanciful staircase, added in the Baroque period, and is sided by a tall stone bell tower.

The interior barrel vaults extend from the outline of arches along the three naves. The church was home to the celebrated Perugia Altarpiece by Fra Angelico, now residing in the Galleria Nazionale dell'Umbria. It is also renowned for its incredibly detailed and towering stained glass window, one of the largest in the world, measuring 23 meters by 8 meters (75 feet by 26 feet). It depicts a host of scenes, including the apostles, the prophets, and the four evangelists, the doctors of the church, martyrs of the Domenican order and the life of St. Giacomo (James).

The Florentine-style arcaded cloister is a green space that held the friars' garden and served as a quiet contemplative spot. Now in the annex, you'll find the interesting Archeological Museum of Umbria, with artifacts and displays from the Etruscans, Romans and Middle Ages.

Haven't visited yet? Have questions about Church of San Domenico? Ask them here!

Enjoy the comfort of a vacation home in Perugia.