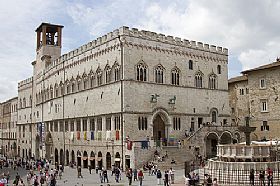 Perugia's immense Palazzo dei Priori was built to impress. It was the seat of the city's government, and was designed to express civic pride and represent Perugia's strength and grandeur. Started in 1293, it underwent three additions and was completed in 1443. These expansions give it an asymmetrical and irregular facade. Its severe face and fortress-like look gave it the feel of a heavy, important castle. The palazzo served as administrative and judicial center of Perugia.

Originally outlined with crenellations on the roof, these were destroyed when Perugia was taken over the Papal States, and rebuilt only after the Unification of Italy. The portal on Corso Vannucci is decorated like the next-door cathedral's. It is flanked by sculptures of the lion and griffin, the symbols of the city. The portal leads into the Sala dei Notari, which is covered in frescoes.

The Palazzo dei Priori is now home to the National Gallery of Umbria, the region's most celebrated art museum. You'll find masterpieces by home-town artist who made it big, Perugino, along with works by Piero della Francesca, Pinturricchio, and many more. The art gallery is open from 8:30 AM til 7:30 PM daily; closed the first Monday of every month.

Haven't visited yet? Have questions about Palazzo dei Priori? Ask them here!