Museum of the Walls 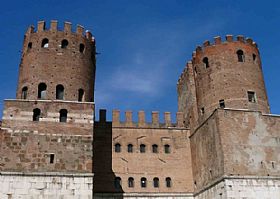 The Museo della Mura is a unique museum dedicated to the Aurelian Wall. The fortification that was built in massive stones by Emperor Aurelius encircled the ancient city to protect it. The museum is located inside the Porta San Sebastiano, the ancient city gate that sits on the famed Via Appia (Appian Way). The monumental gate was built to allow (or deny) access through the wall into the city. It was originally faced in travertine, though it underwent several transformations through the millennia. It is name for St. Sebastian, an early martyr who is buried outside the walls on the Via Appia.

The museum gives an interesting glimpse at the history of the walls and gates, but even better is the access to the top of the wall itself. You can walk along the pathway that runs between the battlements and see the staircases in the towers, the archery and artillery niches, and the grand arches that open on the city-side of the wall. The museum occasionally hosts special exhibits and events.

It is located inside the Porta San Sebastiano on Via Appia, in the vicinity of Ostiense Station, the Pyramid, and the Baths of Caracalla. The Museum of the Walls is open from 9:00 AM to 2:00 PM daily; closed Mondays.

Other views of the Aurelian Wall can be seen at Porta San Paolo, where you can enter the gate and walk on top of the section of wall overlooking the Pyramid; and Porta San Giovanni, near St. John Lateran church, where the Museum of Via Ostiense is housed. There you'll find a museum dedicated to the Roman road that led from Roma to Ostia Antica. There are displays, reliefs and models of Ostia and the ancient sea ports of Claudius and Trajan.

Haven't visited yet? Have questions about Museum of the Walls? Ask them here!